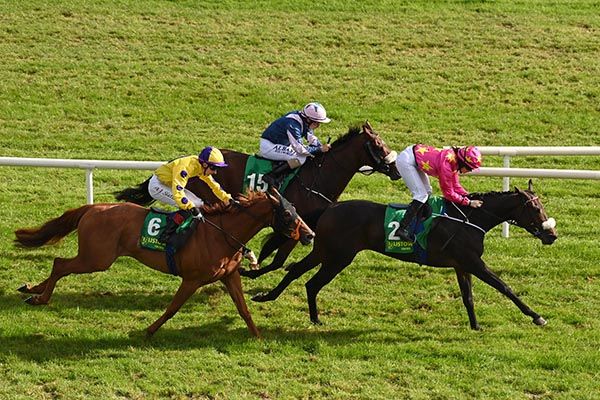 Jessica O'Gorman steered Butterfly Garden home for Kevin Prendergast in the mile and a half three-year-old handicap in Listowel and rode out her 10lb claim in the process.

The pair raced in rear of mid-division from the stalls and were noted inching closer on the outer in the final three furlongs.

The Awtaad filly swept round the bend to improve to second at the two pole and O'Gorman sent her on over a furlong out.

The apprentice kept her up to her work as she passed the post half a length clear at 13/2. Queen Of Seduction couldn't reel the winner in and had to settle for second at 18/1. Sir Allen completed the placings in third at 11/2.

O'Gorman said: "She did everything I asked her to do and gave me a lovely ride. The boss (Prendergast) and everyone filled me with confidence and I can't thank them all enough. I could never work in a better yard and he is an absolute legend and knows everything."

She added: "This is brilliant because I was off injured and returned three weeks ago. I got a fall in Ballinrobe four months ago and I broke my ankle. This is my third winner so I'm down to 7lb now."

The Stewards enquired into possible interference about two furlongs from the finish involving Observing ridden by D. McMonagle, placed sixth, and Riyami ridden by R.P. Whelan, placed fifth, where it appeared that Observing checked off heels. Evidence was heard from the riders concerned. In his evidence D McMonagle stated that he had switched out wide to come with a run when Riyami stepped out onto his path and he had to check off his heels. R.P. Whelan stated that his mount ran very green and was watching the horse on his inner when losing concentration and rolled around. Having viewed the recording of the race and considered the evidence, the Stewards made no alteration to the Judge’s placings. They were, however, of the opinion that R.P. Whelan, was in breach of Rule 214 in that he had ridden carelessly. Having considered his record in this regard, the Stewards suspended him for two racedays.