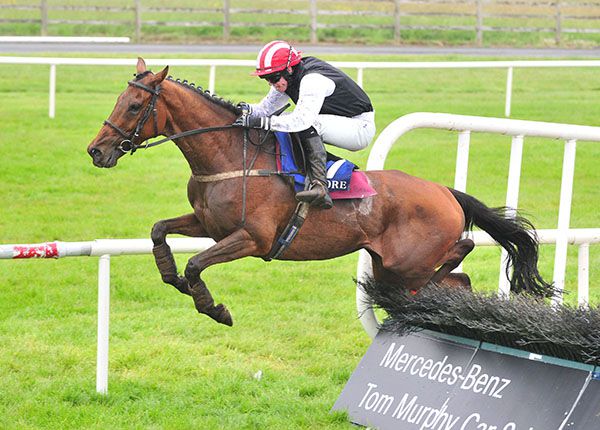 Yaiza gets over the last under Darragh O'Keeffe
© Photo Healy Racing

After winning the opener on Do You Feel Lucky, Darragh O'Keeffe doubled-up aboard Yaiza in the Kilmeaden Business Centre Maiden Hurdle.

A solid fifth in a handicap at Killarney in July of last year, the Liam Burke trained eight-year-old was sent off at 8/1 today.

Settled in mid-division, the son of Well Made took closer order from three out and was pushed along to lead before the next.

Nothing emerged from the pack to challenge, with the bay victor going on to score easily by eight lengths. Our Dark Horse (6s to 4s on-course) finished second under Philip Enright for Eamon Courtney, while Star Of Oscar who was returned the 2/1 favourite, was another four and a quarter lengths back in third.

Burke said afterwards: "It's nice to win with him. I ran him in Killarney last year and he came back with heat in the leg and Walters Connors treated him for me.

"I always thought a good bit of him and we fancied him in Killarney. Darragh gave him a great ride. We’ll see what the handicapper does now."

The winner is owned by the Lanzarote Partnership, of which former trainer Gerry Cully is a member of.