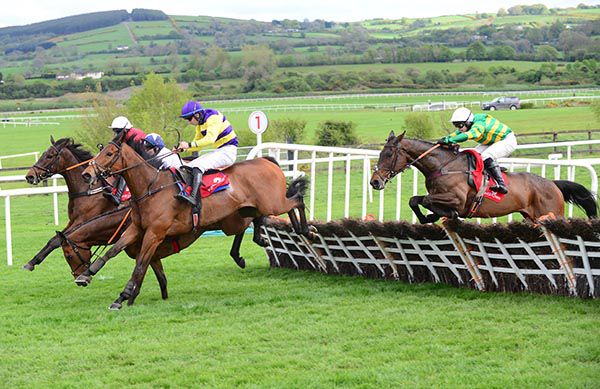 As an amateur O’Neill won a bumper here, also for McManus, on Dead Right at the festival in 2017, and he again looked very assured aboard the Philip Hobbs-trained Musical Slave.

“It worked out — I couldn’t really get any obvious gaps. I thought I’d just sit and wait. To be fair he didn’t do an awful lot in front so it probably worked out in our favour” reported O’Neill after his mount beat Conron by a length and a quarter.

From off the pace also for McManus, Bay Hill performed well to be third, half a length back, after a far from clear passage through.

“I'm delighted. He stayed on very well. I was a bit concerned that the lack of pace might not be in our favour but in the end he kept going very well,” said Hobbs.

“Jonjo was very good. He said he got in a little bit of trouble once or twice but with all those runners you'll always get a little bit.

“It was probably the right thing to bring him to the outside in the end and he stayed on well.

“I presume he's finished for the season and he'll have a good summer off. He wouldn't be wanting fast ground anyway, that wouldn't be his job.

“He was entered at Sandown on Friday in a 100,000 pound race but we wouldn't have been running on fast ground and that's why he came here.

“He can go chasing at any stage, he jumps very well, and that will be his long term job but when that will be I'm not sure.”

A. McCurtin, rider of Ballyegan Hero trained by John J. Walsh, reported to the Clerk of Scales that his mount was pulled up having weakened quickly.

The Irish Horseracing Regulatory Board Veterinary Officer examined Press Conference trained by Mrs John Harrington, at the request of the Stewards and reported the animal to be post race normal.

The Stewards interviewed C.P. McNamara, rider of Mac N Cheese concerning his use of the whip in the latter stages of this race. Evidence was heard from the rider concerned. Having viewed a recording of the race and considered the evidence the Stewards were of the opinion that C.P. McNamara was in breach of R10(3)(g) by using his whip with excessive frequency. Having taken his previous record into consideration, the Stewards suspended C.P. McNamara for 2 racedays.

The Stewards interviewed S.A. Mulcahy, rider of Benny In Milan concerning his use of the whip in the latter stages of this race. Evidence was heard from the rider concerned. Having viewed a recording of the race and considered the evidence the Stewards were of the opinion that S.A. Mulcahy was in breach of R10(3)(b) by using his whip unnecessarily after his chance of winning or being placed was clearly gone and R10(3)(h) by using his whip with his arm above shoulder height. Having taken his previous record into consideration, the Stewards suspended S.A. Mulcahy for 1 raceday.