O'Brien dominates as Codd moves ahead 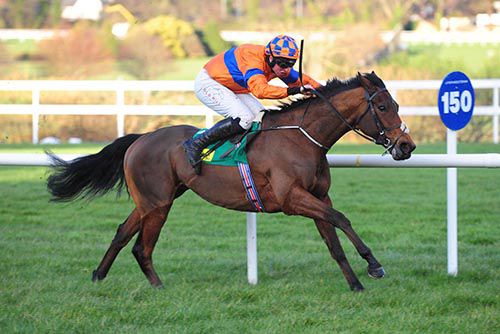 Joseph O'Brien saddled a one, two, three as Jamie Codd moved one ahead of Patrick Mullins in the battle to be crowned champion amateur rider when Montjeu newcomer High Tide made a striking impression in winning the TRM Excellence In Equine Nutrition (Pro/Am) INH Flat Race at Leopardstown.

Whilst Us And Them under Mullins may have shaped better to a furlong and a half out, he had no response when 9/1 shot High Tide changed gear, a turn of pace that took him all the way to a seven and a half length win.

Joseph O'Brien said: "Jamie rode him work last week and liked him a lot. I hadn't initially thought of coming here as I was going to give him more time but Jamie liked him and said he was ready to start off and he was one hundred per cent right.

"They would never go together so it's hard to say (how they would compare). This fella handled the ground well, travelled well and quickened up well. He was impressive.

"He'll go for a winners bumper in about a month's time. The other two ran well. Sarah said her fella is not fit yet and Paddy liked his. He's a big horse by Stowaway, and it's early enough in the year yet."