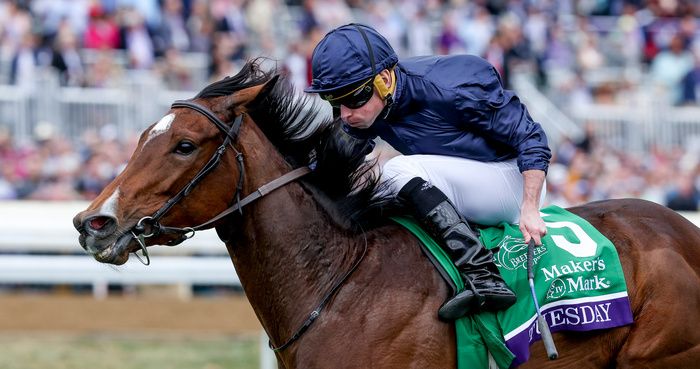 Aidan O'Brien has paid tribute to top-class filly Tuesday after confirming his Epsom Oaks and Breeders' Cup heroine has been retired from racing.

Third in the 1000 Guineas at Newmarket and second in the Irish Guineas at the Curragh, the daughter of Galileo claimed Classic glory with a narrow defeat of Emily Upjohn at Epsom in June.

She went on to finish fourth in the Irish Derby against the colts and chased home subsequent Arc winner Alpinista in August's Yorkshire Oaks.

Tuesday made what was ultimately her final career outing in the Breeders' Cup Filly And Mare Turf at Keeneland earlier in the month - swooping late to claim victory under Ryan Moore.

O’Brien has confirmed Tuesday remained in America ahead of a planned date with Triple Crown hero Justify in the breeding shed next year.

"Obviously, we were delighted with what Tuesday achieved," said the Ballydoyle handler.

"She had a great run in the Guineas, then won the Oaks and to finish off winning at the Breeders’ Cup was incredible really."