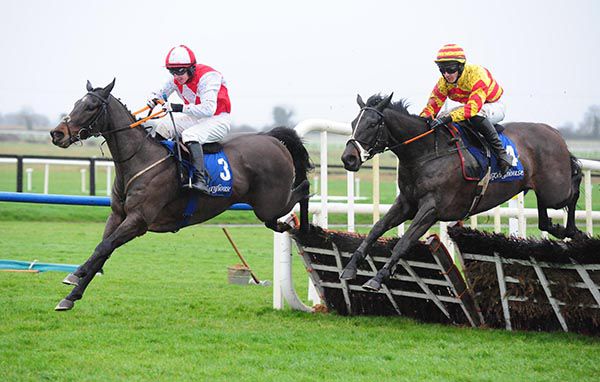 McNamara let the Pour Moi gelding stride on from two out and he had a look around for dangers between the final couple of flights.

Outsider Hammersmith built up a real head of steam from before the last, to press the Gavin Cromwell-trained Wolf Prince on the run-in.

However McNamara always looked like he had matters in hand aboard the victorious youngster, twice placed previously behind the star in this division, Aspire Tower.

A length and a quarter split them at the line.

“It was a messy kind of a race but I suppose on form he should have been winning it,” said Cromwell.

“For a messy race he got away with it. He jumped well on the whole, it wasn't ideally run and I think he'll be better in a better race with a proper gallop.

“He showed gears as well and it was a good enough performance.

“He has an entry in the Grade 1 at Leopardstown but I'd presume Henry's horse would go there and it would be very hard to beat him.

“There is also a 130 rated novice at Naas in February and he could potentially go there.

“He'll probably get an entry in the Triumph but is more likely to go to the Fred Winter. I don't see much point in going and taking on Henry's horse (Aspire Tower) in the Triumph.

“He's the best we have anyway but he has to get there too as well.”