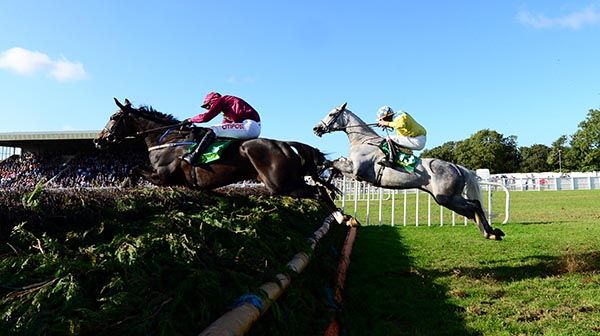 Pat Coyne (5/1) landed the Southampton Goodwill Plate in the hands of Aidan Coleman. Kitty Galore went off into a clear lead but the field closed on her entering the straight and Song Of Earth took over on the run to the final fence.

The grey Pat Coyne was staying on well at that stage and he was too strong for Song Of Earth from the back of the last as he gained a three parts of a length victory. There was a gap of eleven lengths back to Tune The Chello in third.

This was a third win over fences for the John Nicholson-owned eight-year-old.

Winning trainer John Queally said: "Aidan rode two horses for me today because my two regular jockeys Denis (O'Regan) and Jody (McGarvey) were injured. He gave the horse a peach.

"The horse has his time of the year, he has his slot and the distance suited. He always turns up and runs his race for us every day. We'll see what how the weather is towards the end of October as there are races at Galway and Wexford for him but the ground wouldn't want to go on him.

"Chasing is his game as he jumps his hurdle too high."