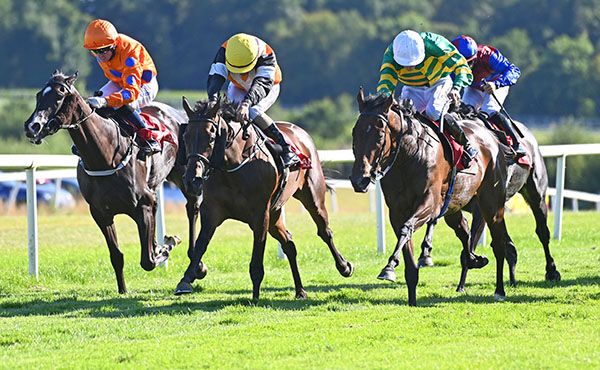 Having been placed in six maidens the Muhaarar filly ran with credit when sixth in Listed company at Killarney last month and stepped forward to claim a stakes victory today.

Shane Foley led briefly on the 7/1 shot before tracking Show Of Stars for most of the nine-and-a-half furlong trip.

She was asked for an effort passing the two pole and stayed on well to get on terms inside the final furlong as Didn'thavemuchtodo also came to dispute.

Paris Peacock stuck her neck out close home to secure a neck victory over Didn'thavemuchtodo. There was half-a-length back to the long-time leader Show Of Stars.

Harrington said:- “It’s a nice way to break your maiden! She has always worked well at home and we couldn’t believe that she could actually get beaten in so many maidens.

“She was a bit unlucky in Killarney, she didn’t get going soon enough. Shane said today that he would buck her out and be on the pace all the way.

“Now that she has got her head in front you wouldn’t know what she might do. She’s running in Craig Bernick’s colours today and it’s brilliant that she has broken her maiden and got big black type.”

Newcomer Quaresome, trained by Kieran Purcell, was a 28/1 winner of the season finale at Roscommon when landing the bumper.

Kartayaz finds for Van Buuren in Down Royal

Kyanna Van Buuren rode the second winner of her career on Kartayaz in the second division of the extended mile and two handicap at Down Royal.

Shoebox King gets off the mark in Down Royal

Shoebox King availed of stall one to take the Coors Handicap over five furlongs in Down Royal.