Pearl Of The West set to sell as McConnell outlines plans 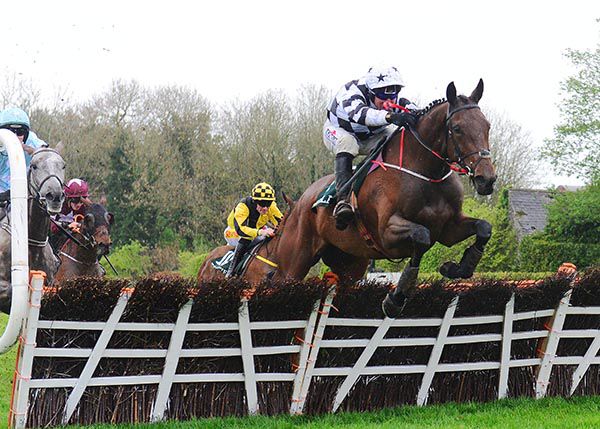 Smart mare Pearl Of The West is due to sell next month as her trainer John McConnell outlined plans for the seven-time winner whose latest run was a credible tenth-placed finish in August's Galway Hurdle.

The daughter of Teofilo has won twice on the flat and five times over hurdles and McConnell said “Pearl Of The West got a break after Galway and is in the broodmare sale at Goffs in about a month’s time. If she doesn’t sell we’ll bring her back in and probably aim at the Galway Hurdle again."

Pearl Of The West finished just ahead of eleventh placed stablemate Plat The Game in the Galway showpiece and the trainer added “Play The Game will probably go chasing next year. It will either be that or stay hurdling and go for the Galway Hurdle again. He’s also on his winter break and is out in a field.

“He’s not a big horse but he jumps like a cat so he probably will jump fences well.”

Regarding two more of his horses, McConnell added “we pushed Make The Switch hard to make that maiden hurdle (at Downpatrick in August) as the owner was home for it and we wanted to get him there. We gave him a break after that, and he’s done very well for the break and put on a lot of weight.

“We’ll bring him back in the spring and pick a winners race and decide where we go after that. He might be a horse to have a good bit of fun with over the summer."

“I’ve been a little bit disappointed with Fred The Foot. I thought he’d run well at Navan and he was very disappointing. He’ll be running in handicap chases and I think there is a nice pot in him if we can get him to enjoy it. He schooled brilliantly before Navan and just didn’t bring it to the track so we’ll have to try and get his confidence back.

"Roi De Dubai might have one more run over hurdles and he’ll go chasing next year."