Pepper makes bright start on road that could lead to Moyglare 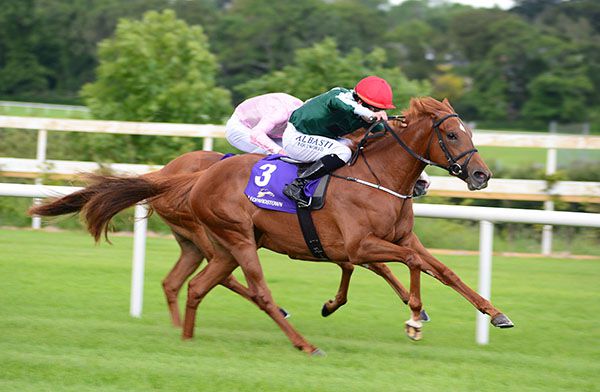 Cayenne Pepper (16/1 into 6/1) made a lovely debut to win the Irish Stallion Farms EBF Fillies Maiden (Plus 10 Race) for Jessica Harrington and Shane Foley at Leopardstown.

In the colours of Jon Kelly, Foley chased the leaders on the Australia debutant, and the chestnut found herself in third position at the halfway stage.

Ridden to go second a furlong and a half out, Cayenne Pepper pressed the leader, A New Dawn inside the final furlong.

She led in the last fifty yards to account for A New Dawn by three parts of a length.

“She’s a lovely filly but I was surprised last week when Shane said she’s ready to go. I thought being by Australia that she might need a bit more time but he said no," revealed Mrs Harrington.

“I’d say we’ll take our time with her, and she was bought to be a three-year-old. She has a good temperament and did it right. She has no big entries but I’d say we’ll put her in the Moyglare when the time comes.

“Ascot comes up very soon and I think she’s going to be a mile filly anyway. She needed every bit of that seven furlongs.”

The Stewards informed A. Kinsella, trainer that Mono Loco would have to be recertified before being declared to run from stalls again.