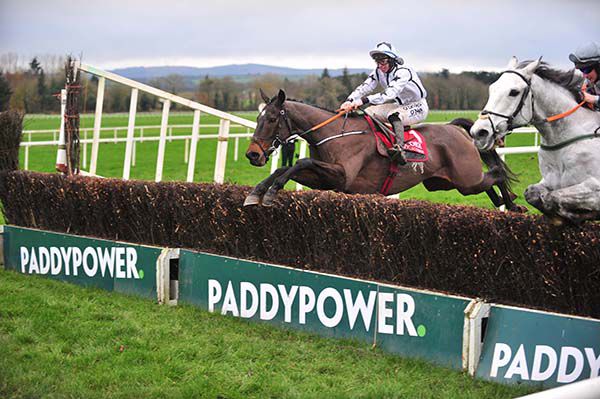 Connections of Doctor Phoenix will wait until nearer the time before committing to a run at the Cheltenham Festival.

The Gordon Elliott-trained veteran enjoyed an excellent first season for the Nicky Bradley Racing Club after being snapped up for just £10,000 — winning three races, including the valuable Dan Moore Memorial Chase at Fairyhouse and a Grade Three prize at Naas.

Having struggled to make a significant impact in his first five starts of the current campaign, the 11-year-old returned to Naas to defend his crown in the WhatOddsPaddy? Chase and shaped with far more encouragement to fill the runner-up spot behind odds-on favourite Cadmium.

He holds multiple engagements at Prestbury Park — in the Queen Mother Champion Chase, the Ryanair Chase, the Brown Advisory & Merriebelle Stable Plate and the Grand Annual — but ground conditions will be a key factor in deciding whether he will cross the Irish Sea.

Will Smith, racing manager for the owners, said: “We just want some rain for him more than anything.

“He ran a good race the other day. He is actually slightly better right-handed, but he obviously goes well at Naas and ran well to finish second to a good horse on good ground in Cadmium.

“I know a lot of trainers are wanting a bit of rain to make the ground safe. But as far as he’s concerned, we could do with bucket loads of it — he really wants it like a bog to be seen at his best.”

Doctor Phoenix’s Cheltenham target, or otherwise, will be down to his trainer.

Smith added: “We’ll leave it up to Gordon to decide where he wants to go.

“He’s in a couple of handicaps at Cheltenham and the Queen Mother and the Ryanair. I’m sure Gordon will make a decision closer to the time — once we’ve seen what the fields are like and what the ground is going to be like.

“I actually think he could run well in a Queen Mother. There probably won’t be many runners, with Altior in there, and if they went fast on soft ground he could pick up a good chink of prize-money.”