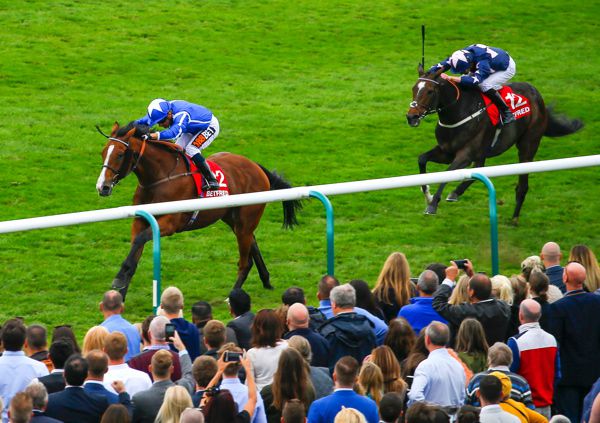 Withhold must give weight to all his rivals if he is to come out on top in the first £1million running of the Sky Bet Ebor at York.

The six-year-old made a winning comeback at Newbury after a 269-day absence and is reported by his trainer Roger Charlton to be in top form, although the Beckhampton trainer feels being burdened with 9st 10lb is not ideal.

“It would be nice if he wasn’t top-weight, but there we are,” said the Beckhampton handler.

“I’m happy with him. I think it’s an extremely good race, as you’d expect, and it’s going to be very tough.

“The draw (six) looks fine. I don’t know what’s a good draw or a bad draw. In the Ebor a lot of high numbers seem to have run well in the past, but I’m happy with that.”

“What more is there to say about him? He’s won eight out of nine for us,” said Johnston.

“We know how tough this is going to be, and it should be for this sort of prize-money, but he more than any horse has earned the right to run in it.

“You love the way he sticks his neck out and Joe (Fanning) is unbeaten on him.

“Every time you think he might have peaked, he pulls out a bit more.”

The Middleham handler also has Chester Cup winner Making Miracles and Baghdad, a winner at Royal Ascot, chasing a share of the big pot.

Weekender found only his stablemate Muntahaa too good last year, but connections of the John Gosden-trained gelding accept this will be harder to win.

“It’s effectively a Group race, but it should be with the money on offer.

“I’d like to have seen him coming in on slightly better form, but the target has always been his race.”

Trainer Ger Lyons reports Mustajeer to be in tip-top shape as the six-year-old bids to build on his fourth place 12 months ago, before going for the Melbourne Cup.

“Mustajeer is in good form and we have been happy with his preparation,” said the County Meath handler.

“He ran very well last year to finish fourth. We rode him to get the trip that day, and we were delighted with his effort and how he saw out the distance.

“We have been really pleased with him so far this season and he ran well to finish fifth last time out, which was a nice stepping stone.”

Willie Mullins, successful with Sesenta 10 years ago, provides the other two Irish raiders in Max Dynamite and True Self.

Max Dynamite won the Lonsdale Cup here in 2015 and has twice been placed in the Melbourne Cup.

“Max has been in good form lately. He won last time out (at Killarney). It was a lesser amateur race. He was well-in and he’d run well at Ascot when he was a bit keen,” said assistant trainer David Casey.

“The nature of this race allows him to run in a handicap now for the first time for a while. He’s in good order. He’s won round the track before and likes the place.”

Casey also expects True Self to run a big race despite a poor run at Leopardstown on her latest start.

He said: “She’s very well. It was a probably a bit too soft when she got beat by Klassique in Haydock, but she’s run well since in a Group Two.

“She was drawn very wide and ran a bit keen the last day at Leopardstown. We think she’s better than she showed that day. We’re hoping for a very good run from her as well.”

Kelly’s Dino has been in tremendous form this season for Karl Burke, but has to contend with the widest draw of all — as well as a 4lb penalty for his latest success at Newmarket.

“He’s in good form, but it’s sod’s law that we didn’t need the penalty to get in after all.

"Then we’ve been drawn widest of all which will do us no favours, but we’ve got to overcome it,” said Burke.

“He had a wind op at the end of last year and it has really helped. He will improve again from Newmarket in terms of fitness.”

Raymond Tusk takes a drop in class and trip after being down the field behind Stradivarius in the Ascot Gold Cup.

Tim Palin, director of owners Middleham Park Racing, said of the Richard Hannon-trained four-year-old: “Raymond Tusk has been freshened up since the Gold Cup and his preparation has been good.

“Stepping back into handicap company over this trip will really suit and he goes there with a fighting chance.”

Charlie Fellowes has targeted this race for last year’s Melbourne Cup third Prince Of Arran and was satisfied with the comeback run of his globetrotter at Goodwood.

“Prince Of Arran is in good form and the Ebor has been the long-term plan — the two races we have focused his year around are the Ebor and the Melbourne Cup,” said the Newmarket handler.

“I was pleased with his performance at Goodwood over a mile and a half on a track he didn’t really like. That race should have put him spot on for the Ebor.”