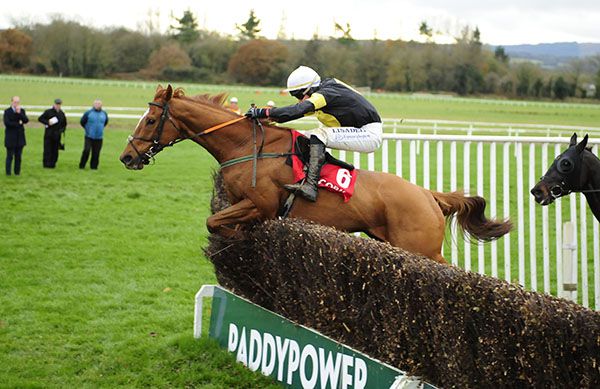 Powersbomb (20s into 16/1 on track) came out on top in the 2020 Annual Membership Handicap Chase, leading after two out and battling on well for Adam Short to get home by a length from Just Get Cracking (11/1). Drumconnor Lad (22/1) was only a head further back in third place, with the 3/1 favourite Uisce Beatha finishing fourth.

Third after a bit of a lay-off at Down Royal last time out, the Trans Island nine-year-old was landing the fifth, and most valuable, win of his career.

He has run plenty of other good races too, including when leading between the final two fences in the Novice’ Handicap Chase at Cheltenham in 2017, where he eventually finished fourth behind Tully East.

It was the first time for the 3lbs claimer Short to ride the winner, who gave him a 12th success of the season.

Winning trainer, Co.Clare-based Brian McMahon, who was not present, has also enjoyed plenty of success over the last couple of seasons with four-time winner Se Mo Laoch.