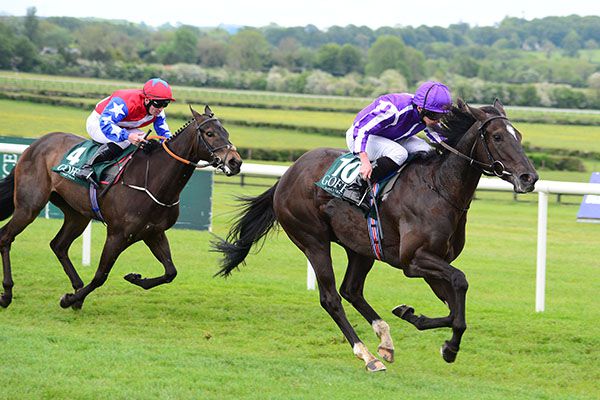 So Perfect (9/10) became the third Aidan O’Brien-trained winner of the day at Naas, and a second ridden by Ryan Moore, in the Group Three Goffs Lacken Stakes.

Paddy Power more than halved So Perfect (25/1 into 12/1) for the Commonwealth Cup at Royal Ascot, hardly surprising given the comprehensive nature of her two and a quarter length win here. BoyleSports go 14s Gustavus Weston (hampered under two furlongs out) fared best of the rest, at odds of 50/1.

The result stood after an enquiry.

So Perfect was prominent and ran freely.

Switched right and bumping with a rival under two furlongs out, So Perfect made good headway to lead a furlong out.

Ridden and keeping on well in the final 150 yards So Perfect went on for a third career win.

“She’s a big, powerful mare and has the option of the Commonwealth or the Kings Stand. I’m delighted we came back with her," stated O'Brien.

The Stewards enquired into possible interference in the closing stages involving Gustavus Weston, ridden by G.F. Carroll, placed second, Inverleigh ridden by C.T. Keane, unplaced, On A Session (USA), ridden by W.M. Lordan, unplaced and So Perfect (USA), ridden by R.L. Moore, placed first, where it appeared interference may have occurred. Evidence was heard from the riders concerned. Having viewed the recording of the race and considered the evidence, the Stewards made no alteration to the Judge's placings and took no further action.