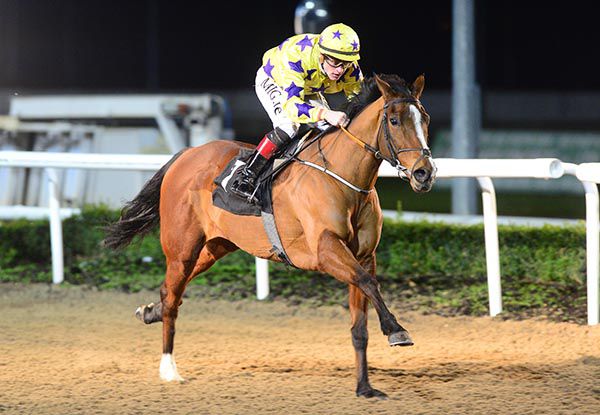 The progressive Jake Peter bids for his fifth win of the year in the €20,000 Happy New Year From thetote.com Handicap Hurdle at Punchestown.

Pat Flynn’s charge has won three on the level and once over hurdles and connections will be hoping to round off the year in style in the two-and-a-half-mile contest.

He made a successful debut on the all-weather at Dundalk last time when running out a cosy winner.

Having opened his hurdling account at Thurles last month he looked set to follow up on his first start in handicap company over course and distance earlier this month.

Artic Pearl chased him down on the run-in, however, getting up for a half-length success.

The Intikhab gelding looked to bump into a well-handicapped rival that day and has gone up 4lb for that effort.

He steps into a higher grade handicap and faces some smart rivals towards the top of the weights.

Gordon Elliott’s Stooshie has been running in some very competitive handicaps this season and looks a danger.

He finished a decent fifth behind Salty Boy in a hot contest at Navan and taking a slight drop in class now he has to be a leading contender.

Elliott also saddles top weight Boot Camp who switches back to hurdles having finished well held in a rated novice chase at Galway on last start.

This two-and-a-half trip, which he won over at Bellewstown back in the summer, may prove a more suitable trip now for the Milan gelding.

Smart mare Dawn Shadow reverts to the smaller obstacles now having pulled up in Grade Three company over fences at Cork earlier in the month.

Dot Love’s charge is a Listed winner over timber and was also placed twice at Grade Three level so has to be respected if she can recapture her best.

The Flemensfirth gelding was also fourth in Grade One company, albeit well beaten, when last seen in action at the Punchestown festival in April.

The Willie Mullins-trained gelding is joined in the field by stablemate C’est Jersey who has chase experience having run twice over fences last term.

The six-year-old reverted to hurdles last season after pulling up in the Grade Two Ten Up Novice Chase at Navan in February and it will be interesting to see how he fares on his return.

The juvenile maiden hurdle on the card looks another interesting contest with a few fascinating contenders making their first outings over hurdles.

Mullins saddles Fenta Des Obeaux who ran out a cosy winner of her sole start in a French bumper.

Surin has her first start for Gordon Elliott having been purchased for £72,000 following her win in a Market Rasen bumper in October.

Joseph O’Brien introduces another Ballydoyle recruit in Gardens Of Babylon who was only two and a half lengths off Irish Derby winner Latrobe when making his debut in a Leopardstown maiden as a juvenile.