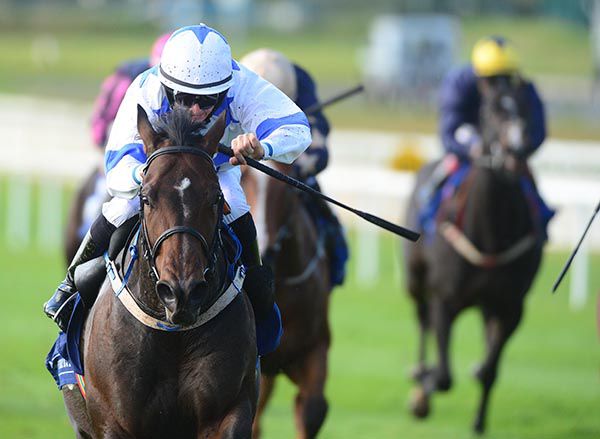 Martyn Meade believes Advertise is in the form of his life ahead of the Qipco British Champions Sprint at Ascot.

The Showcasing colt will be bidding for his third Group One victory of the season on Saturday, having won the Commonwealth Cup over the course and distance at the Royal meeting before landing the Prix Maurice de Gheest at Deauville in August.

A dirty scope ruled him out of last month’s Sprint Cup at Haydock, but the upside of missing out on a trip to Merseyside is the fact he will line up on Qipco British Champions Day, which is live on Sky Sports Racing, as a fresh horse.

“He seems to be in really good form at home — I think he’s as good as he’s ever been,” said Meade.

“I can’t believe how many are running. After all the rain I thought we might end up with five or six runners and we actually have 17, but it is what it is and hopefully the best horse will win.

“We’ve not over-raced him this year, he’s had a nice break since Deauville and has strengthened up well.

“I don’t think the ground will be a problem. There are some other good horses in the race, but we’re positive and hoping for a good run.”

The William Haggas-trained One Master returns to the fray just under a fortnight after successfully defending her crown in the Prix de la Foret at ParisLongchamp.

“I think she’ll enjoy the ground and she seems very well since winning the Foret,” said the Newmarket handler.

“We’re coming back in trip, but if they go hard and fade, hopefully she’ll be finishing strongly.

“The 13-day gap between her races is not ideal, but she’s had only four runs and likes soft ground.”

Ryan said: “Hello Youmzain is a young horse, only three, and we’ve minded him this year. Hopefully that will pay dividends in the long run. He’s a very exciting horse and there’s no reason why he can’t improve and get stronger next year.

“Brando is a seasoned warrior who turns up for every big occasion and runs his race. He’s run well in the race before and is a star — a marvellous horse who holds his form.”

The last three winners of the race are in the field again, with 2016 hero The Tin Man, 2017 victor Librisa Breeze and defending champion Sands Of Mali all declared.

The Tin Man returns in fine form, having produced his best performance of the season so far when a half-length second to Hello Youmzain at Haydock last month.

“He’s been a regular in the race and won it once. He’s fit and fresh heading into it this time,” said Fanshawe.

“I was so pleased he ran so well (at Haydock) and he has come out of it really well.

“I always thought he wanted better ground, but he handles soft ground as well as anybody else and a lot of his relations love it.”

Librisa Breeze has only run once so far this season, filling the runner-up spot in the Hungerford Stakes at Newbury in August.

Trainer Dean Ivory said: “It’s been two years since he won it, of course, and we’ve had a lot of ups and downs, as you do with these sprinters, but I’m hopeful after his Hungerford run.

“The ground might be on the heavy side for him, but who knows? It will be lovely just to see him in that race again.”

There are four Irish challengers in Denis Hogan’s Make A Challenge, Aidan O’Brien’s So Perfect, the Joseph O’Brien-trained Speak In Colours and Forever In Dreams from Aidan Fogarty’s yard.

Make A Challenge has already enjoyed an extraordinary campaign — rising from a lowly mark of just 66 to his current mark of 111 after winning six of his 10 starts in 2019, most recently dominating his rivals in a Listed contest at the Curragh last weekend.

“It’s a big ask and a step up in class, but he deserves to be there.

“I’m looking forward to it as I think he’ll love the conditions.”

So Perfect steps back up in distance after finishing second in the Flying Five at the Curragh and the Prix de l’Abbaye at ParisLongchamp on her last two starts.

O’Brien said: “She’s run some great races over five (furlongs) on her last couple of starts. We always thought she would get six and she has run well over it in the past.

“Her form recently has been better over five and I suppose it’s six furlongs in soft ground that you’d have in the back of your mind.

“She seems to be in good form, though. Donnacha is riding Speak In Colours for Joseph, so Seamus (Heffernan) rides her.”