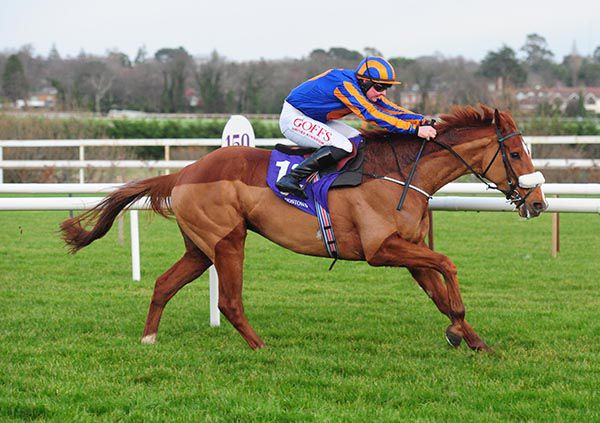 Risk Factor runner-up twice last summer, made it third time lucky when reappearing off a five months’ break to land the Racing TV-sponsored bumper at Leopardstown.

Joseph O’Brien has dominated bumpers over the past month and this Michael Tabor-owned gelding is yet another promising four-year-old for the Piltown handler.

Backed on track from 6/1 into 4/1, he made most of the running under Tom Hamilton and took command inside the final furlong to beat Hamundarson by six and a half lengths.

Good Time Jonny made some late headway to finish another length and a half adrift in third.

O’Brien said, “We always thought a good bit of him. He ran well in his two runs but I was a little disappointed that he hadn’t won.

“He’s had a break and it sounded like a good race so we didn’t know what to expect but Tom gave him a very good ride.

“He was still quite green through the race and I’d say he’s decent enough.

“We’ll probably work back from Cheltenham and it makes sense to run again here (at the Dublin Racing Festival) on the way.”

Paddy Power and Betfair were both impressed with the win and have Risk Factor disputing favouritism at 14/1 with Israel Champ, Ferny Hollow and another Joseph O’Brien-trained gelding Eric Bloodaxe in the ante-post market for the Cheltenham Champion Bumper.

Reflecting on the performance of Fakir d’Oudairies, who earlier finished second to Notebook in the Racing Post Novice Chase, O’Brien commented: “He ran well but you would love another go at it.