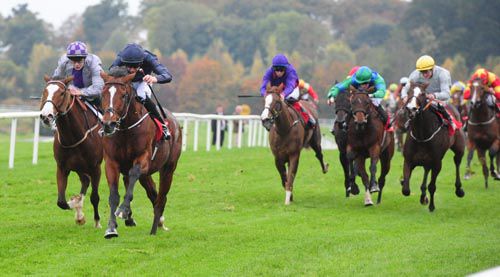 "He's genuine. He's been off the track for a while and he's entitled to improve from the run," said Joseph O'Brien after he completed a double for his father Aidan on Crocodile Rock in the finale at Gowran, the Racing Again November 21st Maiden.

Strongly backed eight to eleven shot Crocodile Rock was soon clear but So Focussed came through to press from over a furlong out.

The hot-pot stayed on well under pressure in the final furlong for a three parts of a length success.

"He should stay a bit further and will hopefully get another one," added O'Brien.

The Stewards interviewed Ann Grace,representing Denis Gerard Hogan, trainer of Neatly Put (GB),and Conor Hoban, rider, concerning the conduct of this horse prior to this race and mindful of his behaviour at Cork last weekend.

Evidence was heard from the trainers representative who stated that the horse behaves well at home but can be a bit excitable and that perhaps the application of a hood the next day may help her charge.

Evidence was also heard from the rider concerned.

Having considered the evidence the stewards noted the explanations but ordered that the horse be recertified before being declared to run from stalls again.

Furthermore the trainer was reminded, through his representative that any re-occurrence of this behaviour may render his charge liable for suspension.

James Ferguson is finding it difficult to split Deauville Legend and El Bodegon ahead of the Sky Bet Great Voltigeur Stakes at York on Wednesday.

Irish fillies over in force for Yorkshire Oaks

A strong Irish-trained challenge on the Darley Yorkshire Oaks is in prospect at York on Thursday.

Cheltenham to cap Festival attendances in 2023

Spectator capacity at Cheltenham will be capped at 68,500 people per day for the four days of the 2023 Festival in a move to enhance the experience of racegoers attending, the Jockey Club has announced.