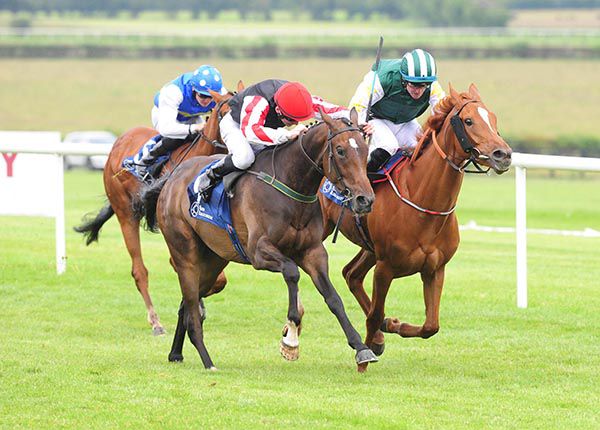 Millford Sound completed a double at Naas for Gavin Ryan, as he made all in the concluding Summer Racing & BBQ Evening July 24th Handicap.

After finishing a good second at Bellewstown on Thursday, the Tony Mullins trained gelding was expected to go one place better today and was sent off the 15/8 favourite (available at 7/2 in early shows).

Sent straight to the front by Ryan, the son of So You Think was ridden and pressed from the two furlong pole. Bellepower threw down a strong challenge inside the final furlong, but the winner battled on gamely to see off that rival by a nose.

The runner-up was returned at 11/1 under Mark Gallagher for Johnny Feane, while Alice Milligan (16/1) and Final Endeavour (18/1) were third and fourth respectively.

Ryan, who earlier scored on Baby Power said: "He was second in Bellewstown two days ago and we were worried that he might be a bit flat after that run.

"He loves to get out and get things easy in front. It was a half-mile shorter today than Bellewstown but he's a tough, gallant horse in fairness to him.

"Every race he's improving. It took a while for the penny to drop, and hopefully he'll keep going the right way."

The Stewards interviewed M.A. Gallagher, rider of Bellepower, concerning his use of the whip in the final two furlongs of this race. Evidence was heard from the rider concerned. Having viewed a recording of the race and considered the evidence the Stewards were of the opinion that M.A. Gallagher was in breach of R10(3)(g) by using his whip with excessive frequency. Having taken his previous record into consideration, the Stewards suspended M.A. Gallagher for 1 raceday.