Sangarius strikes in the Hampton Court 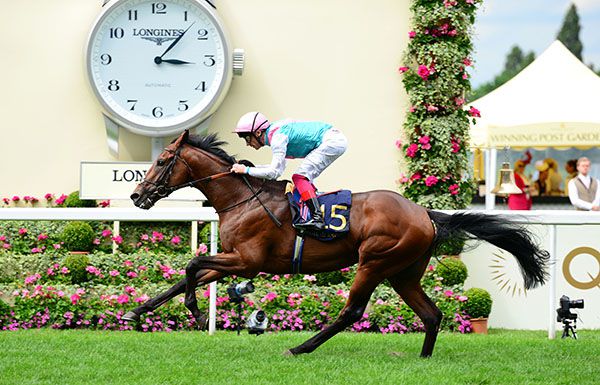 Sangarius delivered on his early promise with a clear-cut success in the Hampton Court Stakes at Royal Ascot.

Sir Michael Stoute's charge was considered a potential star after winning his first two starts as a juvenile, before finishing fourth in the Dewhurst and third on his seasonal reappearance at Sandown.

With form of the latter race working out well after the winner, King Of Comedy, came within a whisker of landing Tuesday's St James’s Palace Stakes, Sangarius was a 13/2 chance for this 10-furlong Group Three and was always well positioned in the hands of Frankie Dettori, who was completing a quick double.

After travelling smoothly into the straight, Sangarius was momentarily trapped for room, but was soon able to kick clear and passed the post with two and a quarter lengths in hand.

Supporters of Fox Chairman are likely to be wondering what might have been, with the 7-2 favourite encountering trouble in running after the home turn before staying on at the finish to fill the runner-up spot.

Stoute said: “He is a horse we have always liked. He did it well there, as he was tight for space and he couldn’t get into enough room to get into a rhythm. He has a turn of foot and is improving.

“I think we knew that before Sandown (wanted a step up in trip), but there wasn’t a suitable mile and a quarter, so we went to Sandown (Heron Stakes over a mile) and he was a little under-cooked as he had a hold up in March.

“No, I wasn’t hoping to have him as a Guineas horse, as I don’t think he is a miler.”

Dettori said: “I had half a split and I took it. He is a very brave horse and made himself plenty of room. Boy, didn’t he half quicken for a big horse. It was a great performance.

“I had a glance and I saw daylight, which in these races is unusual. I was able to push him out to the line and enjoy the moment.”

Teddy Grimthorpe, racing manager to owner Khalid Abdullah, said: “He has handled the ground fine and ran to the line, so from that point of view it is encouraging.

“I think at this stage Sir Michael will keep him at a mile and a quarter and see how we go from there. He is certainly something to relish for the future.

“I’d probably be surprised if he ran in the Eclipse. It is Sir Michael’s trademark to take these horses gently. He has got some great potential, but I would doubt he will chuck him in the deep end.”

Trainer Andrew Balding, responsible for runner-up, Fox Chairman, said: “I don’t think he had the clearest passage, but the winner won very well, so take nothing away from him.

“He could have been a bit closer, but that was only the third start of his career and he’s a nice horse.

“We’ll probably work back from the autumn. I don’t want to overdo him this year. He’s going to be a very smart horse in time.”