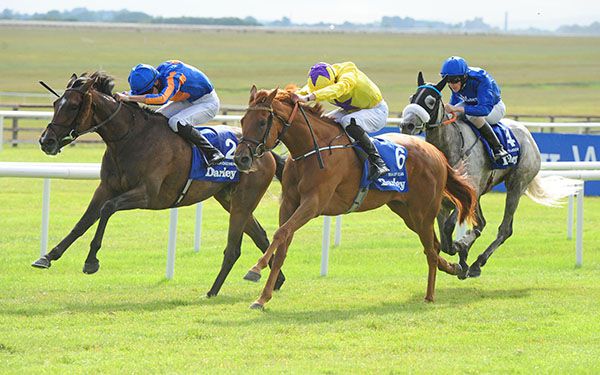 The emergence of Sea Of Class into a Group One performer last season was nothing short of spectacular and trainer William Haggas hopes he will be celebrating more big days with his star filly in 2019.

After starting last term as an unraced three-year-old, the daughter of Sea The Stars stormed through the ranks to claim top-level glory in both the Irish and Yorkshire Oaks, before finding only Enable too strong in an epic running of the Prix de l’Arc de Triomphe.

With connections deciding to keep Sea Of Class in training, the Newmarket handler is keeping his fingers crossed she can maintain her high standards before again going for glory in Paris in October.

Haggas said: “I think every race she ran in last year she improved on the previous race, and her defeat in the Arc was probably her best run. Her run in the Irish Oaks was a terrific ride by James (Doyle) as much as a great run.

“That was her first season racing and she has only had six runs. Hopefully this year she won’t deteriorate. She certainly looks stronger and her movement is good and everything seems to be on schedule.

“I don’t think she was winning races last year because she outstayed them, it was because she was quicker than them. I think she is pretty versatile as regards to her trip.

“There are two races in May for her, the Middleton at York or Tattersalls Gold Cup at the Curragh. She has won over a mile and a quarter already and she has got plenty of speed.

“Everything will be geared towards Paris, but we have a few mountains to climb before that.

“In an ideal world I would like to run her in the Middleton and then the Prince of Wales’s at Royal Ascot.”

Sea Of Class is not the only Group One-winning filly the Skipton-born trainer will have back among his ranks for another campaign, with last year’s Foret winner One Master also being kept in training.

He added: “The connections like their racing and have lots of broodmares and they said if we felt she had a bit more to give, to keep her racing at five. Full credit to them and I hope it pays off.

“She will go for the Lockinge, then on to the Queen Anne as she wants a mile now and she will have to take on the boys.

“She will have a Group One penalty in every race outside a Group One and I don’t like running horses with big penalties.”

An outing in the Derby may not have worked out for Young Rascal, but after posting two Group Three wins at Newbury at the end of the season, the son of Intello will bid to start where he left off at the Berkshire track on Saturday.

Haggas said: “Young Rascal is an interesting horse this year. He is going to run in the John Porter, then he will be in quite a few staying races.

“We might have a dart at the Yorkshire Cup, though I wouldn’t mind taking him back to Epsom for the Coronation Cup.

“I think he might stay a bit further this year. He has run well with cut in the ground and most of his best form is on it, but I’m not convinced he needs it.”

When it comes to potential Classic contenders, Haggas, who celebrated a record 25 winners at Listed level and above last season, could have in promising fillies Rainbow Heart and Frankellina two perfect candidates to take aim at such prizes.

He said: “I don’t know where I am quite going yet with Rainbow Heart, but I’ve put her in the French Oaks and Guineas. She may go to Kempton on Saturday week for a conditions race.

“There is stamina in the family so she should get a mile and a quarter.”

He went on: “I need to run Frankellina in a trial to see if she is good enough for an Oaks. She is bred to stay, but she has got a lot of speed.

“I don’t know where to start her as she had a minor setback, but she is now back in fast work. I might run her at the end of this month in the novice race Give And Take won (at Sandown), then look at the Musidora.

“I’d like to give her two runs before the Oaks, if that’s not possible we will look at the Ribblesdale or Irish Oaks.”

An entry in the Qipco 2000 Guineas at Newmarket next to the name of Skardu suggests the regard in which he is held, after making a winning debut at the track in September — but Haggas is not getting carried away just yet.

He said: “He won his only start last year and is a nice horse. He has done well over the winter and may go to Newmarket next week for the seven-furlong conditions race or he might go for a novice.

“He was very impressive on his debut. He picked up well and won nicely and there was nothing not to like about it. He has a long way to go, though, as he is only a maiden winner.”

“He will definitely go a mile and a quarter again at some stage this season, as I think a mile is the minimum he needs now. He is in the Lockinge and several mile-and-a-quarter races. He needs soft ground to be at his best. He has won a Group Two in soft ground, but it is ambitious to say he is a Group One horse in the making, though he is clearly talented. If it sloshed down with rain in Newmarket he could run in the Earl of Sefton.”

“She won a two-horse race on her final start last year at Ascot. She should improve and looks a lot stronger this year, as she was an immature-looking filly. She will go to Goodwood for the Daisy Warwick Stakes, which is a Listed race. She will then go for races like the Pinnacle Stakes and Lancashire Oaks.”

“She is a pretty useful filly, that is very genuine. She has already won a Group Three and if she stays sound we will look towards starting her off in either the Chartwell at Lingfield or we might go to Ireland for the Athasi Stakes. I would hope she would get a mile this year. She might be the type for the Duke of Cambridge at Royal Ascot. She is a very talented filly, but she is tough and wants to win as well.”

“He is a lovely horse, who should stay well. He has run twice for us, both times at Goodwood, which is probably the worst track for him, but he finished second behind Line Of Duty then won a maiden, so we can’t criticise him. He is only rated 91, so the handicap route is tempting, but we might run him in the Classic Trial at Sandown.”

“He won his maiden quite well and picked up nicely. We’ve put him in at Thirsk on Saturday. I think he is a nice horse, but we just need to plot away quietly with him. He is in the Dante, but if they win their only race at two and first at three you need to give them options. He looks good at home.”