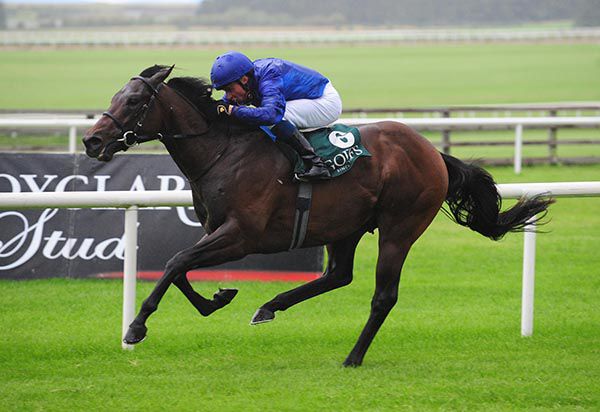 An electrifying performance by Pinatubo in the Group 1 National Stakes at the Curragh saw him maintain his unbeaten record.

Charlie Appleby's Shamardal colt is red-hot favourite for the 2,000 Guineas on the back of this success over seven furlongs, in a time nearly 2.5 seconds faster than the Group 1 Moyglare run over the same trip on the card.

He went off 1/3 favourite for this 400,000 euro race and his backers had very few worries.

The Godolphin juvenile took closer order passing the halfway stage and soon tanked into the lead over two furlongs from home.

He was shaken up by William Buick a furlong and a half down and the pair were clear at the furlong pole.

He moved further and further clear and spreadeagled the field by nine lengths. Armory (10/3), who is a Group 2 and Group 3 winner, came in second with another Group 2 winner, Arizona a neck back in third. Both Armory and Arizona are trained by Aidan O'Brien.

Charlie Appleby said: “He’s a trainer’s dream once you get to know him because he doesn’t excite you in the morning to say the least.

"We started his career off at Wolverhampton for a reason as we didn’t really know he was in the yard. He’s done nothing but improve with each run.

“James (Doyle) said he didn’t really travel in the first half of the race at Goodwood, and I said to William this morning 'don’t panic if this horse isn’t travelling with you early as at home he won’t pick the bridle up'.

“As soon as William gave him a squeeze he soon came back on the bridle and from two down I couldn’t see him get beat. It’s not often you can say that at this level.

“I gave him a gallop mid-week with some of the nicer two-year-old's trying to give myself a bit of confidence and I probably did the reverse as Royal Crusade put him in his place.

“He just goes through the motions and the jockey gets off and says he’s moving well. He goes home and eats, drinks, sleeps and that’s the end of it. We only ever see the best of him when he turns up at the track which is a nice position to be in.

“The way he’s developing as an individual over the last six week has been noticeable. People were questioning whether he would just be a two-year-old but he’s got a nice walk and presence about him. He’s a very exciting horse.

“I’ll have to discuss things with Sheikh Mohammed but the way he’s won there I don’t see any reason why he couldn’t run in the Dewhurst.”

William Buick said: "I haven't (ever ridden a two-year-old like that). Obviously (stablemate) Quorto won this last year and he was very impressive when he won it. Quorto beat a subsequent Derby winner (Anthony Van Dyck) but the performance that Pinatubo put in here was special.

"We saw him at Goodwood do something similar but today was a proper race and a proper Group 1 and it was a hugely, hugely exciting performance and it felt as good as it looked. He just keeps lengthening and quickening right up to the winning line.

"He's a very relaxed individual, a very laid-back horse which is great. He has a great temperament and adapts to all different circumstances, whether it be in a race or anything that can be thrown at him."

Pinatubo is five from five having progressed from a novice stakes victory at Wolverhampton on debut throught to LIsted and Group 2 glory at Royal Ascot and Goodwood respectively.