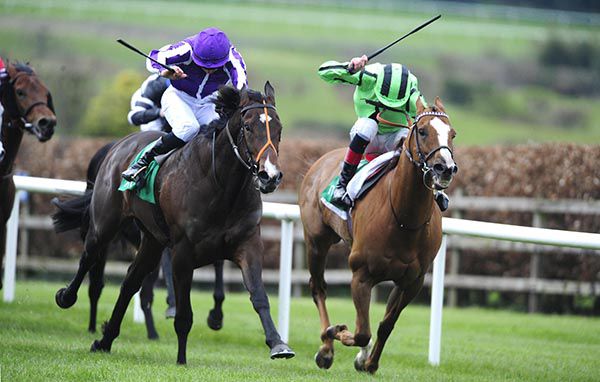 The feature at Navan this afternoon, the Listed Cork Stakes, went the way of the Aidan O'Brien trained Sergei Prokofiev

Successful in the Group 3 Cornwallis Stakes at Newmarket on his penultimate start, the son of Scat Daddy, then finished eighth in the Breeders' Cup Juvenile Turf Sprint at Churchill Downs in November.

Well-fancied to record a fourth career win today, the bay colt was sent off the 15/8 favourite under Donnacha O'Brien.

Towards rear in the early stages, he made good headway on the outer from the two furlong pole and surged to the front inside the final furlong. Chessman attempted to chase him down in the closing stages, but he ultimately had to settle for second, with a head the winning margin.

The runner-up was returned at 16/1 under Oisin Orr for Richard O'Brien, while Smash Williams (6/1) was a neck back in third.

Donnacha O’Brien said afterwards: "He's really, really quick. He travelled very smooth and picked up well. I got there a bit too soon, and he probably doesn't stay more than five. They were coming at him at the end."

R. Coakley, rider of Primo Uomo trained by Gerard O'Leary, reported to the Clerk of Scales that his mount got tight for space.

At the request of the Stewards, M.C. Hussey, rider of All The King's Men trained by A.P.O'Brien, reported to the Stewards' Secretaries that his mount was weakening when tight for room.