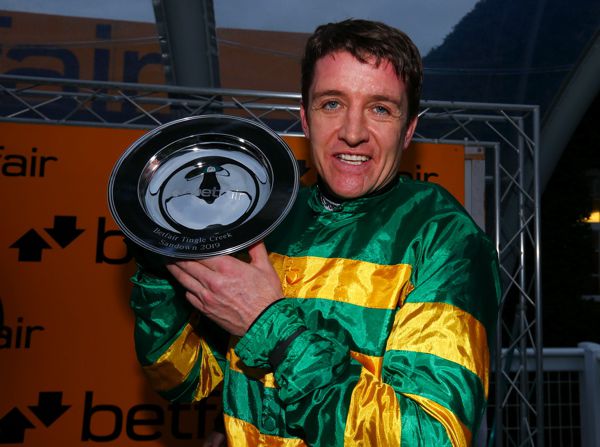 Winner of the Relkeel Hurdle on the card 12 months ago, the classy seven-year-old was winning for the first time over fences at the fourth attempt.

Champ appeared to have matters under control for Barry Geraghty, albeit he had put in a few less than perfect jumps on the way round.

Running down to the second last, Champ had a five-length advantage with those in behind hard at work, but it all went wrong as he put in a short stride and Geraghty was fired into the turf.

That left Midnight Shadow to pick up the pieces, but he jumped the last awkwardly and idled up the hill despite Danny Cook’s best efforts, allowing Paint The Dream to close to within a length and a quarter.

Cook told ITV Racing: “It looked like Barry had the race sewn up, but my lad was brilliant today.

“He relaxed really nicely, jumped from fence to fence, but just idled a bit after the last.

“We probably would have been a good second, but he was pulling himself up on the run-in.”

Geraghty said: “He was brilliant through the race, but running to the second last he was looking around a bit and met it wrong.

“It was a novicey fall. He seemed to get up OK, so hopefully he’s fine.”