Sheisdiesel motors to treble, Meade spared 'kick up the ass' 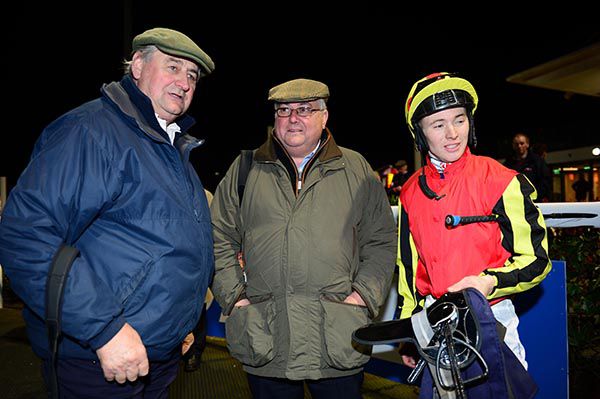 Noel Meade was in a self deprecating mood at Dundalk today as the eight-times Champion Jumps Trainer sent out Sheisdiesel to complete a hat-trick of consecutive recent wins in the Esther McGahon McGuinness & Company Handicap.

The daughter of Harbour Watch had won just twice from 27 starts prior to stepping up to 1m2f,150yds for the first time when winning a Claiming Race at the Co Louth venue in February and having again followed up at that trip subsequently, today won at her first try at 1m4f.

Afterwards Meade quipped “the trainer took a long time to find out that she needed the trip. We ran her over seven and a mile for so long and I need a kick up the ass to be honest for taking so long to get to a 1m2f!

“We felt when she ran in the 1m2f the last day that she looked like she's stay a 1m4f and she stays it quite well.

“I often thought before that jump trainers end up with horses that stay a little further because we train them a little bit different than the Flat trainers.

“Everything about her pedigree would suggest five, six or seven would be as far as she'd get but she's getting a mile-and-a-half around here and she loves it here.”

“It's not hard to see why he is a champion jockey, he's a very good rider.”