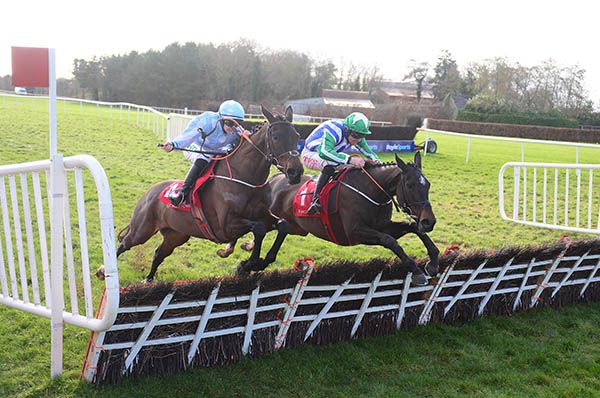 Rachael Blackmore was seen at her brilliant best when getting Sinoria back up in the closing stages to claim the INH Stallion Owners EBF Novice Hurdle at Punchestown.

The Henry de Bromhead-trained mare hit the front two from home in the two-mile Listed contest where La Sorelita (in the same colours of owner Kenneth Alexander) blundered and Tintangle crashed out.

5/2 favourite Chosen Mate gave chase entering the straight and got his head in front going to the final flight.

Sinoria showed plenty of heart to battle back and got on top in the closing stages of the run-in to post a hard fought three-parts-of-a-length win at odds of 6/1.

The winning mare had previously opened her jumping account in a maiden hurdle at Down Royal on St Stephen's Day.

De Bromhead said:- “She’s really tough, and it was a great move by Rachael at the second last. She said she was very brave coming down to the last with the other horse in on top of her.

“We will have to consider the Mares’ Novice race at Cheltenham for her now. We are in a very fortunate position having Honeysuckle which is owned by Kenny (Alexander) as well.

“We’ll see nearer the time but it’s nice to have two. Both will stay further so maybe we could look for an option for one of them to run against the geldings.

“I’m delighted to win today and get black type as she has a savage pedigree.”

Paddy Power put the winner in at 7/1 (nrnb) for the Mares Novice Hurdle at Cheltenham. Honeysuckle is the current 3/1 favourite with the same firm for the race.