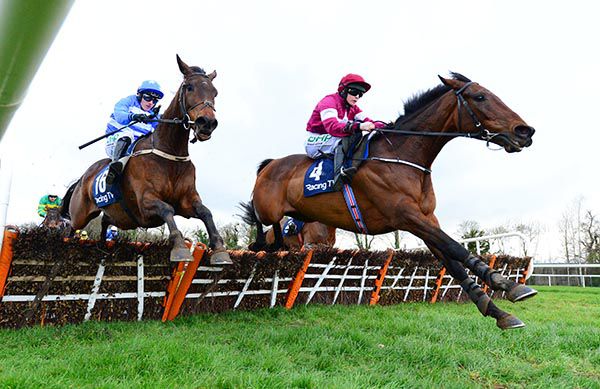 Smoking Gun in front over the last
© Photo Healy Racing

Smoking Gun blasted home after the last flight in the Racing TV Handicap Hurdle to give Joseph O'Brien and Rachael Blackmore trebles on the card.

The well backed 4/1 favourite began his move after the fourth last and improved to sixth three out.

He tanked into third rounding the home bend and challenged Kilkeaskins First jumping the penultimate obstacle of this two and a half mile race.

Blackmore sent him on and once he was given the office on the run-in he scooted right away in the final 150 yards to win by two and a half lengths at 4/1.

Stablemate West Coast Time flew home on the run-in to grab second at 14/1 and is certainly one for the notebook.

The placings were completed by Shar Whats Therush (11/2) and Brave Out (16/1) in third and fourth respectively.

Joseph O'Brien said: “That was good. Over two miles on good ground it just all happened a bit quick for him the last day.

“He went up in trip today and the bit of juice in the ground helped him too. Rachael gave him a lovely ride.

“He's an improving horse. Last year he didn't show much in bumpers but he did well on his winter's break and improved.

“He's a nice staying type of horse. We'll see what the handicapper does now.”