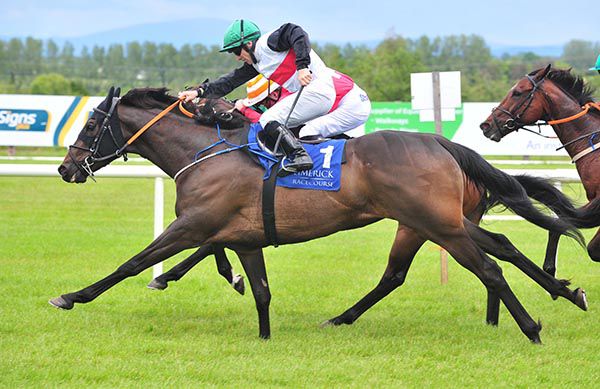 Hit The Silk made it two wins from his last three starts, as he kept on best to take the Drive Play Live At Limerick Racecourse This Evening Rated Race.

The Pat Murphy trained six-year-old won over the course and distance in October of 2017, but failed to make an impact last season.

He bounced back to form when successful on his penultimate start at the Curragh, but he again disappointed on his most recent effort at the Co Kildare venue.

Sent off at 12/1 this afternoon, the Derek Leonard owned gelding raced towards rear under Wayne Lordan.

Pushed along the outer from the two furlong pole, he was soon ridden and came with his effort, edging to the front inside the final 100 yards, before going on to prevail by half a length. Improving (10/1), who also came with her run from off the pace, had to settle for second under Mark Gallagher for Austin Leahy, while 16/1 chance Koybig was another length and a half back in third. Mokhalad was sent off the 4/1 favourite and he finished a disappointing sixth.

Leonard said afterwards: "There is no trainer present as his wife is going to Bon Jovi, so Pat is on baby-sitting duty!"

"Pat was happy with him during the week, he worked well. The last day at the Curragh the ground was probably too firm. He likes a little cut and seven furlong seems to be his trip although he could stay a mile.

"We might run him at the Curragh at the end of the month, there's a race for him over seven there on the Friday of Derby weekend."