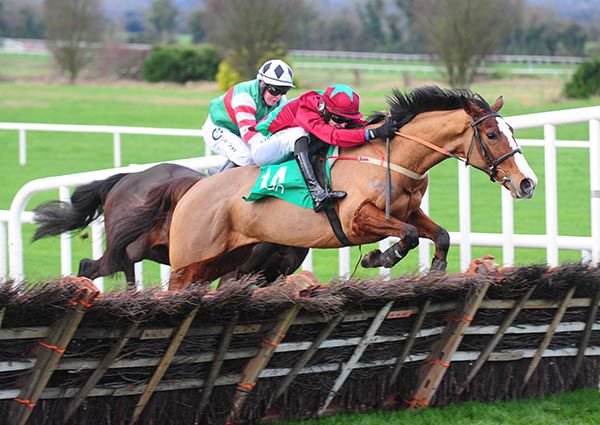 He put up a pound 'over' at nine stone eleven, but Danny Mullins' efforts to get down to nine ten for the ride on Agusta Gold (7/1) paid a rich dividend when the mare triumphed in the feature at Proudstown Park, the Grade B Navan Handicap Hurdle.

Like the opening winner on the card, Galvin Agusta Gold is by deceased stallion Gold Well, and she's trained by Mullins' mother Mag.

Second favourite Chatham Street Lad tried to do this from the front but he eventually had to yield to Agusta Gold, at a distance of a length and three parts. Jimmy Breekie didn't get a clear run in the straight and he ended up three parts of a length back in third, whilst market-leader Ronald Pump (mistake three out) stayed on from the back to be a length and a quarter off them in fourth.

“We were in two minds whether to go for the 0-109 handicap or this one. We waited until the last minute and the top few didn’t run so we were only a few pounds wrong," explained the winning trainer.

“I’m just charmed with her. She was just a bit babyish last year, and has strengthened up into a powerful mare. We’ll try and find another race like that and she should be suited by a fence next year.

“Danny gave her a lovely ride and it’s great for the lads that own her along with me. He’s a great sire that Gold Well and it’s a pity that he’s gone. They’re tough and genuine.

“We’ll see what’s coming up for her in the next month and think about it.

“Salty Boy won a good handicap for us here as well this season, and they are similar galloping and staying horses. Salty Boy could run (at the Dublin Racing Festival) in Leopardstown.”