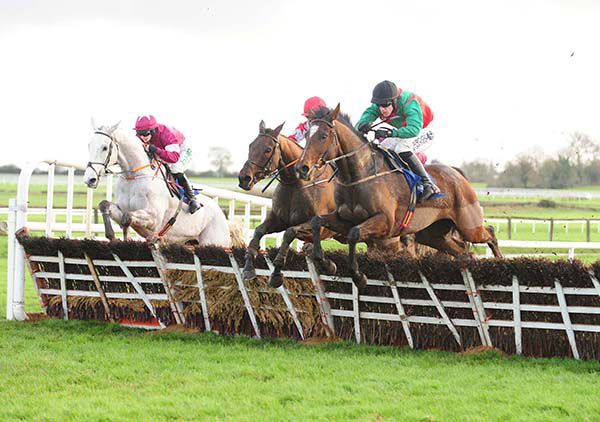 On the day when Solerina was remembered in the featured Grade 3 Mares Novice Hurdle it was very appropriate that her son Halsafari should record a gutsy win in the Easter Festival 21st — 23rd April Maiden Hurdle at Fairyhouse.

The six-year-old gelding was sent off a 7/1 chance against 20 rivals in this 2m4f event. Deal With It made a bold bid from the front but the 11/4 favourite was headed at the last by the Michael Bowe-trained winner who kept on well on the run-in.

Brian Hayes’ mount had a length and a half to spare at the line, with State Of Cognac keeping on another length and three quarters back in third.

Owner John Bowe said, “I'm delighted, it was the first day this season that he settled. That was the problem in his last few runs. He just needed a couple of runs as he was running too keen. Brian got him lobbing along on the outside and gave him a perfect ride. The step up to two-and-a-half miles and the softer ground suited him as well.

“The most important thing was winning on the day of the Solerina race, it was a privilege. That's the second winner she's bred and it's great to win on this day in particular. His half-brother is out tomorrow in Naas (Pairc Na Ngael).

“We've nothing specifically in mind for him. We'll see what the handicapper will do and he'll jump a fence in time hopefully. We were just relieved to get that and settling him was the key today.”