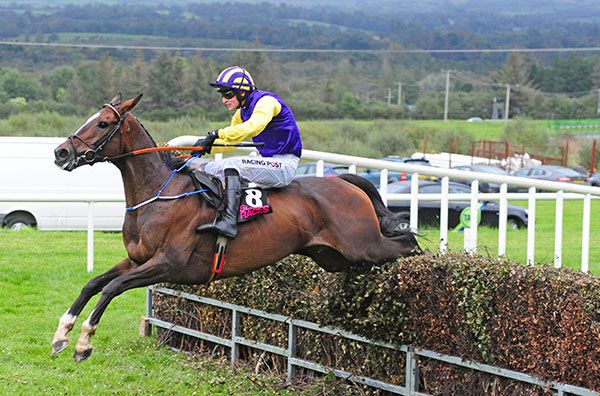 A costly sort to follow in his days in the point-to-point fields, Doran The Legend came good on his fourth racecourse outing in the Start To A Successful Year At Sligo IT And St Angela’s College Handicap Chase.

In handicap company for the second time, after pulling up when tried in the sphere for the initial occasion at Tramore last month, Doran The Legend did much better here, upped to an extended three miles.

Owner Paddy Kehoe has had some good horses down the years, principally the mare Grabel, and Doran The Legend was bred by his sister Philomena Crampton.

The same connection’s Party Playboy hasn’t enjoyed much luck, for Kehoe, Crampton, and his other owner, David Doyle, in recent times.

However the purple and gold got a successful airing here for the father and son team of Tony and Danny Mullins.

Presumably named after Wexford hurling great, Tony Doran, the Oscar gelding raced in the rear of mid-division, before making headway into a moderate fifth five out.

Closer in third when left second three out, the 14/1 victor led travelling well after two out.

Clear pace-setter Rudy Catrail had a reduced lead when falling three out.

“He was good. Maybe he got a little bit of a fright the last day in Tramore, first run in a handicap on a tight enough circuit,” said Danny Mullins.

“He got into the race on a nice rhythm today and done it well. I don’t know how strong the race was and hopefully he can follow up again.”

The Stewards requested a report from Anthony Mullins, trainer as to the apparent improvement in form of Doran The Legend, placed first, as compared with its recent form. The Trainer reported that the extended trip today, the better ground and the low grade nature of the race probably suited his charge today. Having considered the evidence the Stewards noted the explanation offered.