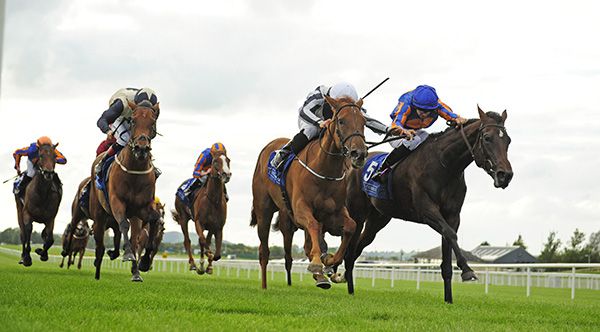 The Jessica Harrington-trained Alpine Star just had her head down at the right time to edge a thriller in the Debutante Stakes at the Curragh this evening.

The half-sister to Alpha Centauri had opened her account at Galway earlier in the month and was stepping into stakes company for the first time in the seven-furlong Group 2 contest.

Shane Foley tracked the leaders on the 2/1 shot but was rowing along passing the two furlong marker.

Alpine Star stayed on to fight it out with that rival inside the final furlong and was in front where it mattered to record a short-head win.

“Shane said they went hard the whole way and she got a little bit lost in the middle of the race but when she got upsides all she wanted to do was stick her head out. She's tough and needs a mile.”

“I've got Albigna for the Moyglare. She likes that dig in the ground and we'll see where she goes now. She's won a Group Two now. She's in the Fillies Mile and also the Prix Marcel Boussac. They'd be options.”

On Windracer, who finished eighth, she added:- “She ran much better. She probably needed it badly and she'll come again in the autumn.

“I just had to run her because of the ground but I'm much happier with her today and she wasn't knocked around when she was beaten.”