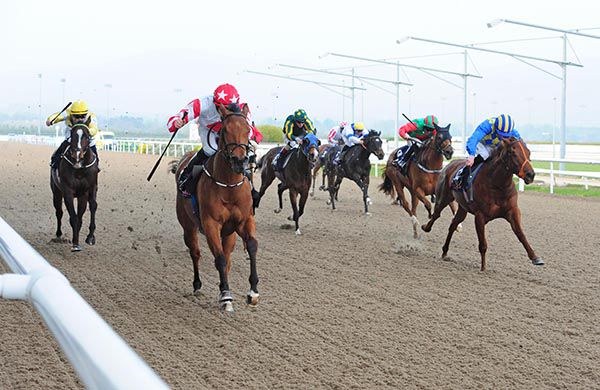 Sundance Star deservedly got off the mark on handicap debut at Dundalk today as the Ken Condon trained filly landed the Hen & Stag Packages At Dundalk Handicap under jockey Bill Lee.

The daughter of Helmet had finished second, over today's five furlongs trip, on each of her last three runs in 2018 and today made use of her 71 rating when beating Sunset Nova by a length.

Jockey Lee later stated “she’s done it well. She jumped and travelled well. Myself and Ken had a chat beforehand and we were keen enough to get a lead early on and let her settle into the race — her first run of the season.

“She was lugging a bit right with me up the straight but she kept going well and got to the line well. She might progress off that and hopefully there is another day or two in her.

“When the boys were walking the track (inspection after the first race), the softest part seemed to be on the inside. We were going to be coming up the middle anyway.”

Regarding his ride on Irish 2,000 Guineas winner Romanised at Naas last weekend, for Sundance Star's trainer Ken Condon, Lee added “Romanised ran a good race at Naas. I could have pulled him out at the top of the straight and given him a hard race but I rode him for a little bit of luck and let him progress.

“He’s run a hell of a race giving 5lb to Le Brivido and only beaten a neck. We were happy with him going into the race and we were even happier coming out of it.”