Super impressive from I Am 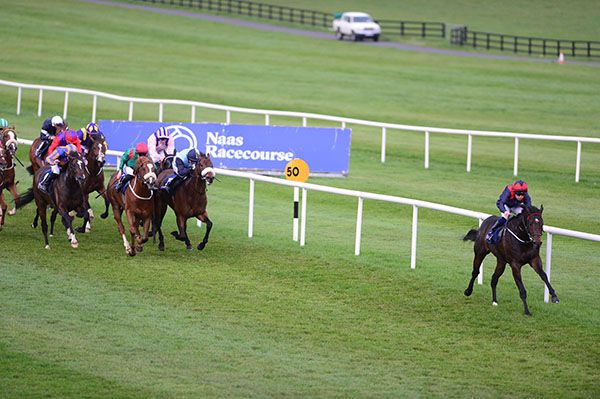 I Am Superman blitzed his rivals in the Blackwater Handicap, scoring under Leigh Roche for Michael O'Callaghan.

A fine second on debut at the Curragh last August, the Footstepsinthesand colt then disappointed on his next two starts.

He got off the mark in fine style on his debut in handicap company at Leopardstown earlier this month, and went up ten pounds for that success.

Sent off a 9/2 chance this evening, the 89 rated bay raced in mid-division early on, before making good progress to lead from halfway.

He was pushed along and went clear with a furlong and a half left to race, going on to score easily by five lengths. Jupiter Road (33/1) came through to take second under Alan Persse, while the Mick Halford trained Karasi (20/1) was a short head back in third. Crockford was sent off the 4/1 favourite, but he never looked like winning, and finished a disappointing thirteenth.

"He's a horse that we thought a lot of last year and we stuck him in the Irish Guineas," said O'Callaghan.

"Obviously he's a long way off running in a Guineas but he's making shapes of being a very nice horse.

"That was a very competitive handicap and he's gone and made them look like handicappers.

"Leigh said he didn't have any choice but to make the move that he made when he made it. He didn't fight with him, let him stride on and he said when he got to the front he switched off and was idling.

"We might run him in the Tetrarch at the Curragh and if he was to come through that we could maybe think about running him in the Guineas.

"It's a long way away and I don't want to sound like a lunatic saying he's a Guineas horse after winning a handicap but he's gone and won well and he's beat some decent horses.

"He furnished greatly over the winter and that's really stood to him. He was second first time out at the Curragh and after that his runs petered out.

"Second time out he was just a bit too enthusiastic here and on his third run he was as weak as a kitten. We probably shouldn't have run him and then we threw him away and it stood to him.

"He's an exciting horse to have."