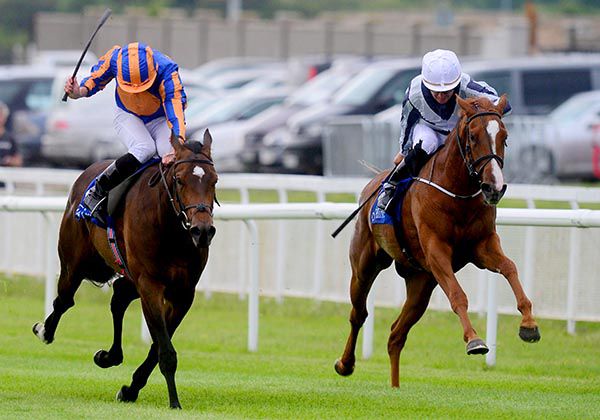 A course and distance scorer on her debut last month Albigna (the very well-backed 5/2 favourite) stormed home to win the Group 2 Airlie Stud Stakes at the Curragh.

For red-hot trainer/jockey combination Jessica Harrington and Shane Foley, Albigna ran down Precious Moments by half a length.

It was a length and a half then to Peace Charter in third.

Albigna raced towards the rear, and she was eighth at the halfway stage.

Pushed along and struggling two furlongs out, the Harrington runner was ridden in fifth over a furlong out.

She went third a hundred and fifty yards out, staying on well to lead in the final strides for a half length verdict.

Peace Charter had looked very likely to score when leading from over a furlong out.

“She got there in the end. Shane said she was outpaced throughout the race and she'd never been so fast in her life but when she got going she was good,” said Mrs Harrington.

“Her class got her there. I thought she was going to be nowhere but then suddenly she took off. It's very bad for my heart!

“I've got some nice fillies and I'm very lucky to have them. We'll find races for them.

“She'll definitely step up to seven, she's not going to go six again, and even at the end of the year she might go a mile. She's in the Moyglare.

“I took the punt on Monday and supplemented her. I hadn't got her in this as it had actually closed the day before she won her maiden here.

“It was money very well spent and it's great when it works.”