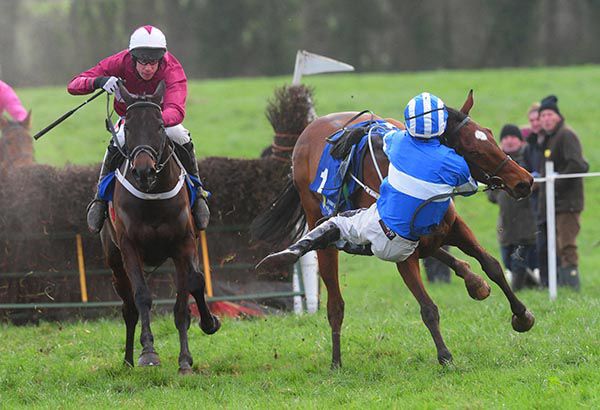 Sweeney, beginning to make a name for himself on the amateur circuit, looked to have the race in the bag on Sunday as he approached the final fence in front.

But his mount took off a stride too soon, landing right on top of the fence and sending him flying forwards and hanging around her neck.

Managing to keep the partnership was some feat — but once he recovered his equilibrium, Sweeney also somehow conjured up another effort, and Ask Heather eventually ran out a comfortable winner by four lengths.

Queally said: “I didn’t see it live because I was in Thurles. But I’ve watched it back, and it was a marvellous recovery — a good day for him.

“The mare kept running straight. If she had ducked one way or another he was gone, but he was able to recover and keep the momentum going.

“He lives close to us and came to work for us, and we copped on he was a good rider. He’s a good lad, works hard and keeps his head down.

“He’s leading the novice riders (under-21 riders’ title) — and if he continues to keep the momentum up he’ll get noticed.”

On Ask Heather, who is now three from three for Queally, he said: “She’s a nice mare and she’s a home-bred. She had a bit of track form (for James Dullea).

“We’ll maybe look at a hunters chase for her.”