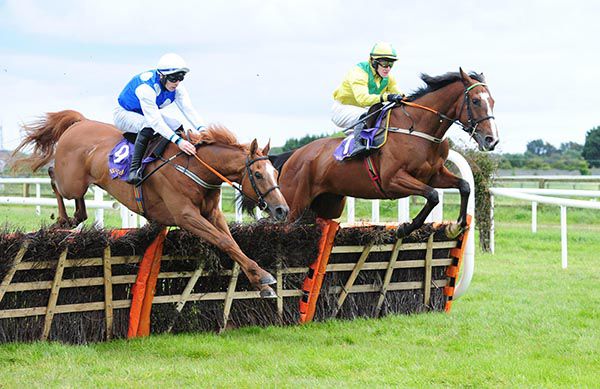 The Rubinator (far side) and Institution
© Photo Healy Racing

The Rubinator, a son of Gold Well, tracked leader and Charles Byrnes trained Institution (which opened a 5/4 shot on track) for much of the contest before getting the better of that rival in the home straight and scoring a length and a quarter success.

Afterwards Croke stated “he was second to Fury Road in a bumper at Fairyhouse but has just had a few little niggly problems since and it looked a very good opportunity for him today.

“He made a little bit of a mistake at the second last but fought back and stayed going. He'll probably get a bit further in time but we'll keep him over two miles for the moment. He has been a funny horse to work with, so we'll just have to see how he is at home and pick out something for him then."