The drinks are on Darragh's followers! 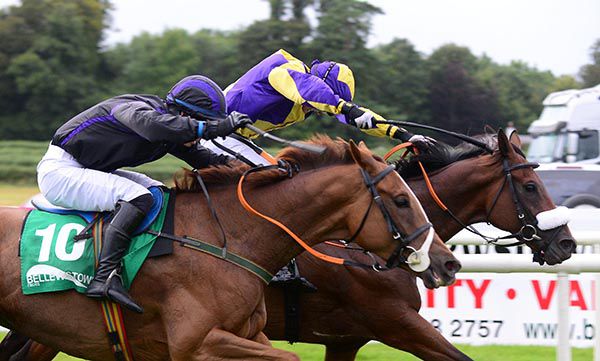 Another day, another double for Darragh O’Keeffe as the red-hot Cork native emulated his Downpatrick brace on Monday when Black Label (5/1) won the John Purfield Memorial Handicap Hurdle by a nose from Alohamora (20/1).

O’Keeffe had earlier scored on Bay Hill and this was a tenth winner in the last three weeks for the jockey who’s on the crest of a wave at the moment. Fred The Foot (7/2) was another two and three quarter lengths away in third in this three-miler, with the 5/2 favourite Spring Watch home in fifth.

It was a fourth hurdles success for the victorious Medicean gelding, to go with four on the level, and a first win in the care of owner/trainer Karl Thornton who remarked: “He had two runs runs for me. I claimed him off a good friend of mine Ado (McGuinness). I asked him and he didn't mind.

“He knows him inside out and maybe just the change of yard and being freshened up helped. When we got him he looked a million dollars for a horse that's had a lot of runs, and he's a credit to him really.

“He's a grand versatile horse and he'll head back to England now I'd say. There might be another day in him on the Flat or something.

“I claimed him for an owner of mine but made the mistake of not putting his name on him so I ended up with him myself which is grand.