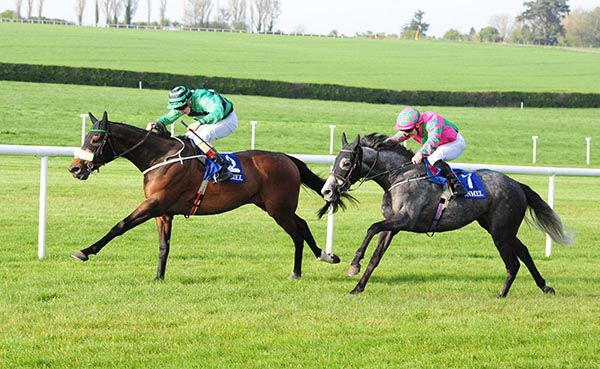 The same connections had to settle for third with odds-on shot Castle Guest in the opening claimer but Tirmizi made no mistake in the extended nine-furlong handicap.

Whelan chased the leaders on the 6/1 shot before sending him to the front two furlongs from home.

He stuck on gamely in the closing stages to repel the renewed challenge of long-time leader Stormy Tale and record a half length success.

It was a second outing of the year for the Sea The Stars gelding who had encountered traffic problems first time up at Leopardstown.

There was a worrying moment at the start when Tirmizi had reared over and unseated Whelan and Halford said:-

"He's not the most straightforward . We bought him a year and a half ago at the Champions Weekend Sale and the owner has been very patient with him and I think he'll have plenty fun with him through the year.

"He got murdered at Leopardstown the last day when I thought he'd have been involved and was staying at it well.

"He'll tip away in handicaps and we might consider hurdling if the handicapper catches up with him. He has size and scope and that was at a level he was entitled to win at today."