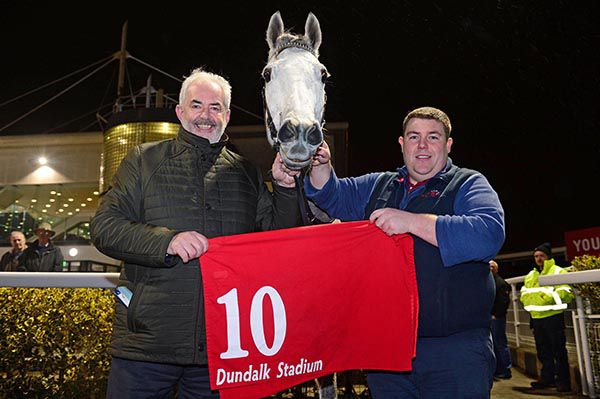 Togoville became the first horse to win ten races on the all-weather at Dundalk this evening as the nine year old won the Coral Best Price Guaranteed Handicap at odds of 33/1.

The nine year old gelding gained his initial win at the Co Louth venue for trainer Georgios Pakidis in December 2014, before winning a further six races for the Greek native until his move to current trainer Anthony McCann in October 2017.

Today's win, under jockey Andrew Slattery, was a third in total for McCann and Togoville thus edged past He's Our Music, Sharjah and Reckless Lad as the winningmost horse at the stadium.

A delighted McCann later reported “it wasn't a shock — the shock this morning was the price of him!

“He had slipped right back down in the handicap, he probably needed every bit of it and with young Andy's (Slattery) 7lb claim off as well, it was brilliant.

“He gave him a great ride. He got hampered coming out of the stalls and I thought he might have thrown the towel in but he didn't.

“He's a tough cookie. I was very lucky to get him and a big thanks to Patrick McCann (owner) and his family for supporting me.

“We were chasing this for a while (the tenth win). He was second in this race last year, he won it the year before so this is his time of year and it's good to get him back in good form.

“It took a while, the were a couple of issues with him but we got them ironed out.”