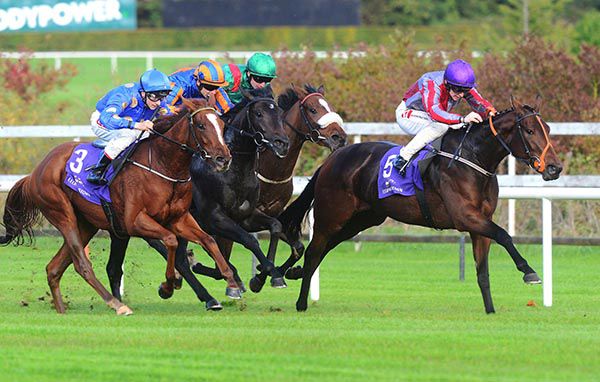 The daughter of Epaulette shed her maiden tag at her third attempt in a Dundalk maiden last month and today was sent to post the unconsidered 33/1 outsider (Betfair SP of 120) of the five runners, headed by Aidan O'Brien's 6/4 favourite Iberia

Winning jockey Keane was indeed beaten by Stella Star on newcomer Sliabh Aughty at Dundalk on September 27 and today elected to make the running with Stella Star.

The chasing four horses were hard at work with two furlongs out and in the end Stella Star responded gamely, and in the style of a smart filly, to eventually beat Iberia by a length and a half.

Mullins, who assisted his father Paddy Mullins in the preparation of 2003 Irish 1,000 Guineas winner Vintage Tipple, today said “that's my first Group winner. I was a bit worried about the ground, but I suppose everyone was, and she ran through it.

“She's very well bred and she's come on leaps and bounds since she won in Dundalk but I was just hoping to be placed.

“She was improving so much I said it was the last throw of the dice at the end of the season and it's great to get it. To win it I am surprised but thrilled at the same time.

“She had the option of tomorrow (€120,000 Foran Equine Irish EBF Auction Race Final) but she

probably won't run! We'll put her away to the spring now. She could come back here, I don't know whether she'd be in Helen's colours or not, for the Guineas trial in the spring.”