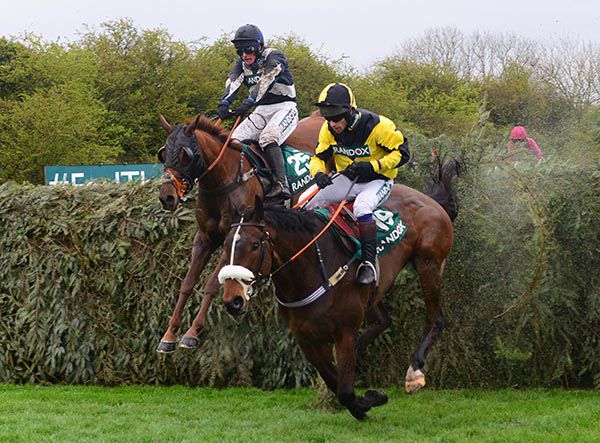 Top Wood battled back gamely to beat Burning Ambition in the Randox Health Foxhunters’ Chase over the Grand National fences, to give rider Tabitha Worsley a victory to remember at Aintree.

Derek O’Connor appeared to have done everything right on Burning Ambition, who skipped the Cheltenham Festival in favour of this race over a shorter trip.

Top Wood, who took over at the third-last from Road To Rome, appeared a sitting duck at the elbow as Burning Ambition swept by, with his rider having sat motionless throughout.

However, Worsley managed to get another effort out of Kelly Morgan’s 12-year-old and the 14-1 chance was pulling clear at the line to win by two lengths, having finished second and third at Cheltenham for the past two years.

It was a real fairytale success for Worsley, as the 24-year-old explained.

She said: “He’s such a tough horse. When the other horse came past us I thought we might get beat, but he stuck his neck out and galloped all the way to the line. I knew he wouldn’t get beaten then. He’s so game.

“The other horse went past us quickly, but my horse just needed a couple of strides to get going again.

“I broke my back the November before last in a fall at Ludlow and then I should have ridden here last year, but I broke my collarbone the week before. Last year wasn’t my year, but this certainly is.”

Morgan said: “He’s just so brave. He’s been branded a monkey, but I’ve never believed it. He’s incredibly tough. When he got headed, he stuck his head out.

“When he jumped the first few and started to get into a bit of a rhythm, I knew he’d be all right.

“Instructions were to get a good start, let him zip away and see if he was enjoying it.”

Fresh from a double at Cheltenham, Rachael Blackmore excelled once more as Moon Over Germany (11-2) made most of the running in the Close Brothers Red Rum Handicap Chase.

While Lady Buttons tracked the well-backed Irish raider into the straight, she could never quite get on terms and the concession of 13lb proved too much.

Henry de Bromhead’s chestnut careered away for a 10-length win.

“He made my job easy, he jumped and travelled and was very impressive. Henry has always thought a lot of him so it’s great he’s done that today,” said Blackmore.

De Bromhead said: “That was great. Superb ride from Rachael and just delighted to win it. He’s a very decent horse.

“He just needed things to fall right for him and thankfully they did today. It was super.”

Fifth in the Weatherbys Champion Bumper at Cheltenham on her previous start, The Glancing Queen proved too good for her fellow mares — winning by two and a quarter lengths at 5-1 from favourite Minella Melody.