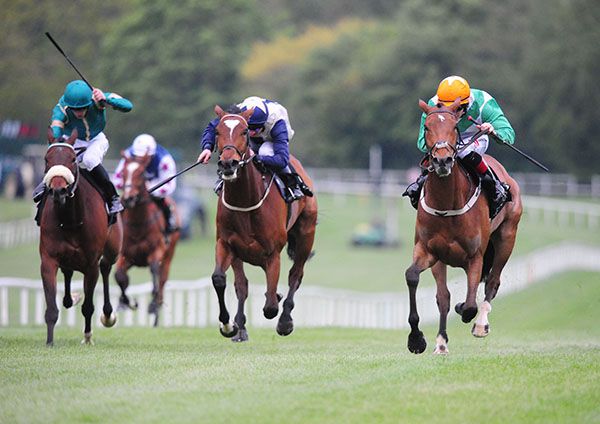 After a three week break,Leopardstown's summer series of evening meetings resumes on Thursday with a card featuring the Group 3 Stanerra Stakes.

This staying test for fillies and mares sees Joseph O'Brien's Cimeara bidding to repeat last year's win,but very much the one to beat on ratings is True Self.

Willie Mullins' six-year-old registered three consecutive wins at listed level,before having to settle for scond place behind Klassique when odds-on for the Group 3 Pinnacle Stakes at Haydock Park last month.

Perhaps the heavy ground she encountered that day was not ideal,and back up in trip on a sounder surface this daughter of Oscar will likely start a warm favourite.

Cimeara scored at Cork on her first start for Joseph O'Brien in April,but has been well-held twice since then,while Aidan O'Brien's quartet of runners is headed by Peach Tree,a good second in the Group 3 Munster Oaks on her penultimate outing.

The Irish Stallion Farms EBF 'Nasrullah' is the most valuable event on the card,and Joe Murphy's Curragh Listed winner Insignia of Rank heads the weights.He has claims of landing a third success of the season,but Peter Fahey's mare Hamley was an eye-catching fourth at the same Derby Festival meeting and Leopardstown regular Tudor City will have his supporters off bottom-weight.

Jim Bolger's Trossachs goes for a three-timer in the penultimate Im5f handicap after a runaway victory in the Apprentice Derby at headquarters a fortnight ago,while the concluding Qualified Riders' Maiden sees a clash between useful National Hunt performers Chosen mate and Go Another One.