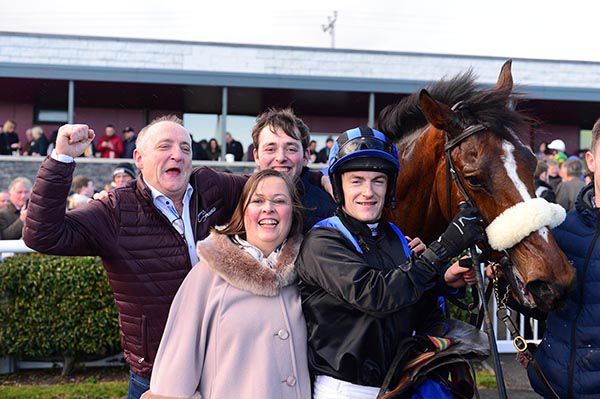 The Keith Watson-trained Amaulino came with a perfectly timed run up the hill to claim the €40,000 Toalsbet.com Ulster National at Downpatrick this afternoon. School Lane made a bold bid from the front in the three-mile four-furlong marathon contest and jumped the last still with the advantage.

Andrew Ring had timed his challenge well on 8/1 shot Amaulino, however, and he swooped in the closing stages to grab the front-runner and post a convincing three-and-a-half length success.

The winner was following up on an impressive victory at Leopardstown earlier in the month when he had beaten the same rival by eight-and-a-half lengths.

Trainer's son Marshall Watson said: "We bought the horse initially from Colin Bowe with this race in mind.

"Leopardstown's win took me completely by surprise, I was shocked.

"Coming here today I said to Andrew Ring about the trip and he said 'he settles that well and he's that lazy he'll be grand!'

"It's brilliant for Jim Matthews who has been such a big supporter of ours and I'm so pleased for him.

"I would say what we will do is go to Aintree for the race before the National as a big day out and then put him away for something like the Midlands National in Kilbeggan.

"There's plenty in him - he beat Kaiser Black in a beginners' chase. If Kaiser Black was here today what price would he be? Don't get me wrong he's not Kaiser Black but he's a nice handicapper.

"He was showing us plenty at home in his homework and we were expecting him to win in Down Royal and he completely disappointed. Andrew came in and said he doesn't handle soft ground.

"He handles good ground and he seems to be better on good ground. He should be a good fun horse for the summer.

"Great ride from Andrew and he is a big part of our team."

Keith Watson said: "I bred a winner of the Ulster National - Peacock Royale."