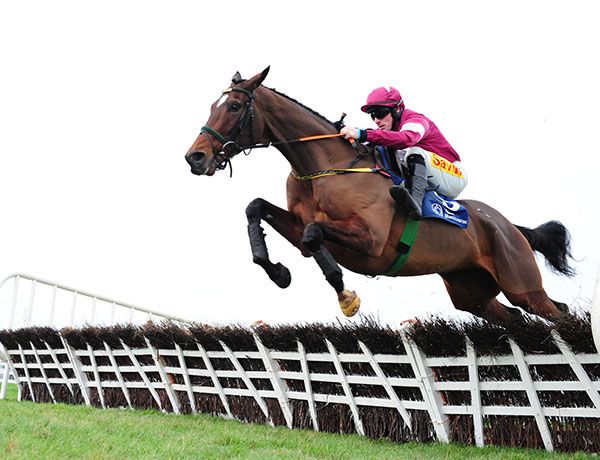 Valdieu made an impressive start to his hurdling career with a facile victory in the opener at Naas.

Sean Flanagan's mount tanked along in third before easing to the front approaching two out.

The leader that he overtook, He's Ok made a blunder there and nearly shot Ambrose McCurtin out of the plate. The jockey lost an iron as Valdieu moved clear. Final List passed He's Ok before the last but could make no impression on the winner who never came off the bridle as he scored by six and a half lengths lengths at 100/30.

Runner-up Final List was a 9/1 chance and he finished six lengths ahead of He's Ok at 100/1. Barrington Court the 5/6 favourite, raced in fourth but went out like a light approaching the home turn and was eased to come in last of the 19 runners. She was found to be lame post-race.

Noel Meade said: "We've always thought the world of him and every time we went to the races we thought he would win and he got beat and I couldn't believe it.

"Malone Road made him look very slow in the north which says a lot for Malone Road.

"However, the last day he was in the north he didn't come off the bridle and he won in a hack canter.

“I wouldn’t be afraid to go two and a half with him. All along I thought he wanted good ground but in Down Royal on softer ground he never came off the bridle.

"We thought we would get going over hurdles as soon as possible. He's a smart horse and what I like about him is he's going forward - when he sees a hurdle all he wants to do is go and jump it and get to the far side of it.

"I'd say there is every possibility of him going to the Dublin Racing Festival. I hope he is a Grade One horse. He's a beautiful mover and he's a gorgeous-looking horse and he jumps extremely well.

Valdieu was last seen winning a bumper at Down Royal by 10 lengths.

The Stewards received a report from the Clerk of the Scales, Mr. W. Fleming, regarding the failure of J.S. McGarvey, rider of Whatwasthatabout placed sixth, to weigh in after this race. Evidence was heard from the rider and official concerned. Having considered the evidence, the Stewards found the rider in breach of Rule 230 (ii) and suspended him for one race day. The Stewards also disqualified Whatwasthatabout from sixth place.