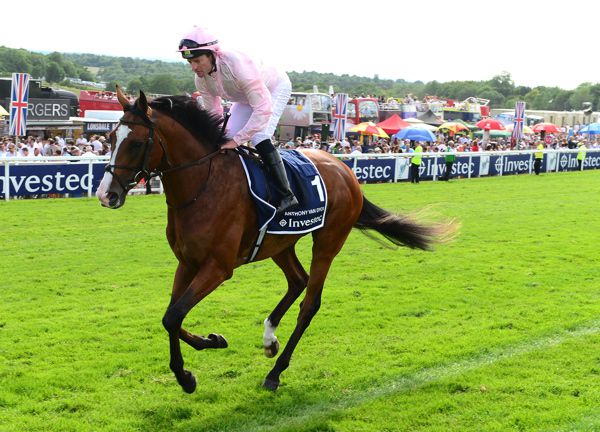 All roads appear to lead to the Curragh next for Aidan O'Brien's premier Epsom Classic protagonists Anthony Van Dyck and Pink Dogwood.

O'Brien has restated the plan is likely to be for Saturday's Investec Derby winner to bid for a famous double in the Irish equivalent at the end of this month - while Oaks runner-up will be ready to take on open-age Group One company in the Juddmonte Pretty Polly Stakes on June 28th.

Anthony Van Dyck's next big date is a day later, O'Brien confirmed, as he provided an update on future plans for several of his Epsom team.

Ballydoyle supplied five of the first six home from their seven contenders in the Derby, as O'Brien took his winning tally in the great race to a record-equalling seven.

Reflecting on Anthony Van Dyck's route to the top, and his hard-fought half-length win from Kevin Prendergast's runner-up Madhmoon, O’Brien confirmed the Dubai Duty Free Irish Derby is set to be the next target.

"He ran in all the top two-year-old races, and he finished up and went to America (for the Breeders' Cup Juvenile Turf) - so he was very solid mentally and physically," the trainer told Sky Sports Racing.

"I think the lads (Coolmore) had it in their head that he would come back to the Curragh if everything went well.

"I haven’t spoken to them yet (since), and they'll probably want to see how the horse is over the coming week and then make their plan - but I think that's what they were thinking of at the moment."

The nagging question Anthony Van Dyck answered for O'Brien at Epsom was that he had the necessary stamina - and he therefore remains confident a drop back in trip at some point will be no issue.

"We thought he would, that a mile and a quarter would be no problem to him," he added.

"He's out of a very fast mare, by Galileo, so I suppose the thing we weren’t sure about was the mile and a half. But he got it very well."

Pink Dogwood, beaten just a neck by Anapurna in the Oaks on Friday, is in line to drop back to 10 furlongs.

"She seems to be fine — everyone is happy with her," said O’Brien.

"We were delighted. She might have a little easy time for a few days, and then she might be trained for the Pretty Polly.

"We’re looking forward to going back racing at the Curragh. We’re thinking of something like that, but haven’t spoken to the lads yet.

"We think she’s a filly to look forward to for the rest of the year."

O’Brien also has high hopes for the future of Sir Dragonet, beaten for the first time as favourite in the Derby but barely a length behind Anthony Van Dyck - in just his third race and only six weeks after his debut.

"Sir Dragonet is a lovely horse," he said.

"He ran an incredible race, and would have learned a lot.

"He was a real baby going into the race, but he ran unbelievably well and is really a horse to look forward to."

Japan, third at the weekend, falls into the same category - having, like the winner, faced a tight schedule to be ready for his prep race.

"Japan was in the same boat as Anthony Van Dyck when he ran (in the Dante) — he wouldn’t even have been ready to run at Lingfield (in the Derby Trial there).

"It was the first time he was ready to start, so we felt he would come forward a lot from the Dante."