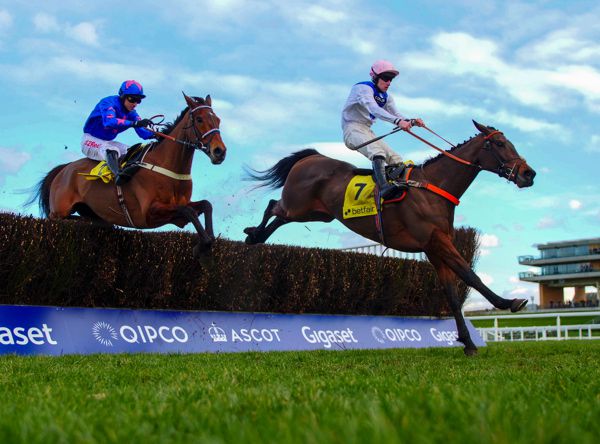 Ruth Jefferson’s stable star realised his Grade One potential in this race last year when he beat much-loved veteran Cue Card by two and three-quarter lengths.

That was lightly-raced Waiting Patiently’s seventh successive victory as he remained unbeaten over fences — only to then suffer a setback which kept him out for the remainder of the campaign.

On Saturday, he faces strong opposition throughout as Charbel, Cyrname, Fox Norton, Politologue and Aso all stood their ground in Thursday morning’s declarations.

Waiting Patiently’s belated return this season came in the King George VI Chase at Kempton, where he was hampered and unseated his rider at the ninth fence after Bristol De Mai fell in front of him.

Politologue went on to finish fourth behind rising star Clan Des Obeaux in that mid-season highlight and after appearing to lack for stamina over three miles, Paul Nicholls’ grey reverts to two miles and five furlongs this weekend.

Neither he nor fellow eight-year-old Waiting Patiently has run again since, and both will be testing Cheltenham aspirations as connections hope to pick up this Grade One prize en route.

The same is true of all their opponents in a highly-competitive renewal.

Nicholls’ Cyrname was a revelation when dominating a big handicap over course and distance last month, as was Kim Bailey’s Charbel in Huntingdon’s Edredon Bleu Chase — having previously finished an honourable second to Politologue at Ascot.

Colin Tizzard’s dual Grade One winner Fox Norton marked his return from a long lay-off by finishing an admirable runner-up to the mighty Altior in last month’s Clarence House Chase over two miles and one furlong — and likely outsider of the field Aso arrives on the back of two big handicap wins for Venetia Williams this season.