Waitnsee completes across the card double for Ryan 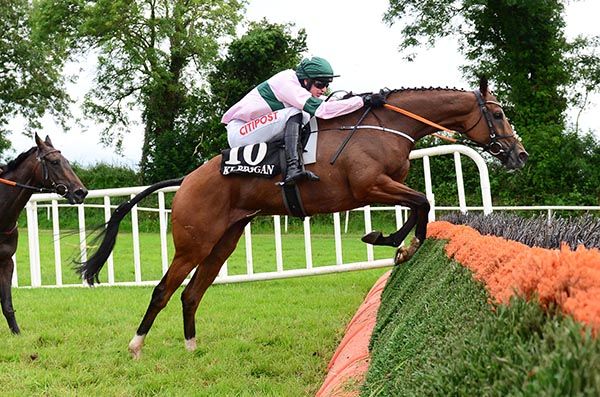 Waitnsee got up close home under Danny Mullins to complete a quick double for trainer John Ryan in the Follow Kilbeggan On Twitter Handicap Hurdle at Kilbeggan.

The Tipperary trainer had sent out Ramondo Dnzeo to win at Cork less than half an hour earlier. However, the victory was much harder won on this occasion as Mullins only asserted on the run-in to gain what seemed an unlikely success. Rock Road who was the fourth successive beaten favourite on the card, appeared to have matters in hand when taking over from Jack Hackett before the final flight but that one had no answer to the late burst of Waitnsee.

“She ran a cracker in Punchestown and we were disappointed that it didn't happen for her in Killarney, it was too quick for her,” said Ryan.

“We're absolutely delighted with her here now. She'll go for the Galway Blazers next.”

Irish Derby winner to stay in training at four

Westover looks set to stay in training as a four-year-old following his sixth-placed finish in the Prix de l’Arc de Triomphe.

Breeders' Cup under consideration for Mishriff

Mishriff may yet have one last hurrah at the Breeders’ Cup after finishing down the field in the Prix de l’Arc de Triomphe on Sunday.

Galway Plate winner Hewick has been sent to America for a tilt at the American Grand National at Far Hills on October 15th, a race worth $250,000.

Soumillon admits he has “bridges to rebuild”

Christophe Soumillon acknowledges he has “bridges to rebuild” after having his retainer with leading owner-breeder the Aga Khan ended with immediate effect.