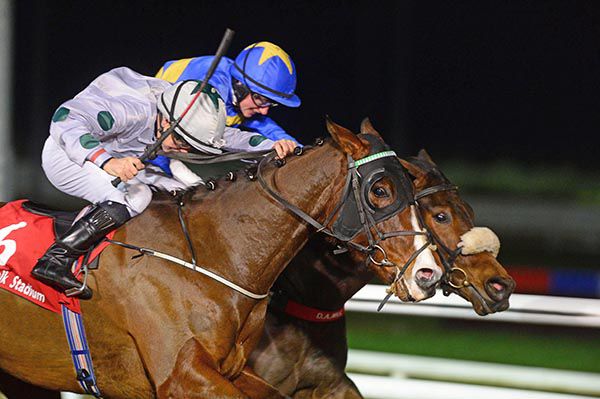 War Hero, near side, fends off Waitaki
© Photo Healy Racing

War Hero made virtually all and held on gamely to land the featured Crowne Plaza Leading Jockey & Trainer Awards 2018 Handicap over seven furlongs.

Niall McCullagh was hard at work with less than a quarter of a mile to travel but his mount kept finding.

The pair were strongly pressed in the final 100 yards but flashed past the post a head in front of the gaining Waitaki (25/1) with Have A Nice Day half a length back in third at 9/2.

Patrick Prendergast's winner brought up plenty of bets as he was supported from 7/1 to 3/1 during the day before going off at 4/1.

Niall McCullagh said: “That was great for a horse having his third run in just two weeks. He had a wind job and was gelded and it’s done a great job on him.

“The last time I rode him I said to Patrick I wouldn’t mind coming back a furlong and the seven really suited him today. I didn’t think there was much pace on and I felt I could do things myself and grind it out.

"He’s kept picking up and has held on well. He’s a hardy horse and is well trained.”