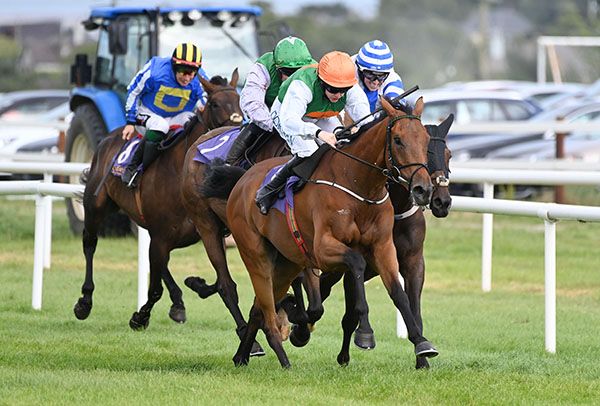 After winning easily at Cork on Monday, Watch The Weather followed-up in the Traynors Of Wexford For Dulux Heritage Handicap Hurdle.

The Ray Cody trained six-year-old came home seven lengths to the good at the Mallow circuit and was given a 13-pound hike by the handicapper.

Carrying just a seven-pound winners penalty this evening, the son of Kayf Tara was expected to oblige, going off the clear even money favourite under Rachael Blackmore.

Given a patient ride, the Sean Connors owned victor made steady headway from four out and came with his challenge on the outer approaching the second last.

Pushed along to lead before the final flight, he was kept up to his work on the run-in, coming home a length to the good from Florey Spud (66/1) and Denis O’Regan in second. Ocojohn (14/1) was just a neck away in third for Tom and Bryan Cooper.

Cody said in the aftermath: "I'm delighted. It probably wasn't ideal running him back again that quick. I don't think he is a horse to be turned out again so quick but we were kind of forced to run him with the 13lb rise. He was 6lb well-in and needed every pound of it today.

"It's brilliant to win another race with him as they are so hard to win. He won with a little bit in hand. Rachael said he just leaned a little bit. He was probably getting a bit tired towards the finish.

"He is definitely going to get a little break now and give him a chance to freshen him up, we won't run him back for a month.

"He will probably go to Listowel. He might be better in a better race with a light weight as he is not overly big.

"I'm delighted for Sean, he is a Galway man and has stuck with me all through the years. Even when I was with Eoin Doyle he’d always have something with us. He had For A Finish and Indian Fair. He is a lucky owner and I'm delighted for him."